The quality is there, there are some good solid announcements and lots of product launches, but #ScreenmediaExpo in terms of exhibition area is slightly smaller than last year. 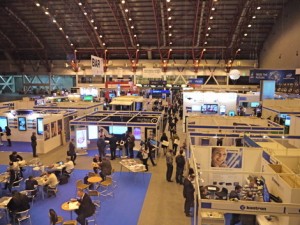 [1]I would guess that part of the problem, as also pointed out by Adrian Cotterill recently, is that too many companies partnered on other stands – not only losing their own branding identity in the process, but, in my opinion, putting the future of such trade shows in jeopardy.

Shows such as #ScreenmediaExpo exist because people spend the money to show off their personal brands and meet their own clients. Ask me the brands of some of those who are lost on partnered stands, and I’d be hard pressed to tell you, but they know who they are.

Nevertheless, exhibitors give me a mix of opinions on day one’s traffic Some say that they have lighter traffic than expected, some say that traffic comes in waves of heavy-light-heavy-light – and a few have said that they were busy making contacts and possible deals the entire day.

The exhibition is bright, easy to manoeuvre, and certainly worth seeing. Hopefully, traffic will be as good or better on day two.

A great show, small but effective

We had 3 “technology partners” on our stand – for many reasons

1 – We work closely with them championing their products
2 – Some don’t have resources for stand & shows
3 – The Muesum show next door took up alot if “industry” resources – i know they are different publications, event organisers – but surely a door between the two or some integration woucl have been good for the industry an both shows.

So partnering is good to expand a show not put it in jepordy, as if the show is sucessful in the “toedip” they might have their own stand in following years.

Another way to expand show, is to team up wth other events – colour scheme areas – so complementary shows like the heritage & Muesum show will have a corner etc. We had alot of visitors from the show next door pop-in and they were very positve leads.