Without taking a stand themselves we noticed that the i DISPLAY or Outform (or whatever they call themselves these days) folks were busy at #ScreenmediaExpo last week placing their revolutionary Android based products in prominent places on other people’s stands. See our post back in January ‘#ISE2012 Early Hyperbole‘. 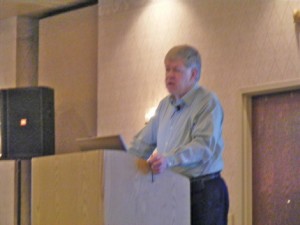 Let me tell you about i Display

At Earls Court we also noticed ex-Scala CEO Gerard Bucas hanging around with said bunch of freeloaders. Ahh! then the light went on above our heads and we got it, D’oh!

Earlier this year (in what, with hindsight, now appears as being in a rather disingenuous† manner, Gerard reached out to us and said “I think you should take a look at i Display as they are doing some rather interesting stuff” – we declined as we had had enough shenanigans with Outform / i Display and Goldrock Capital to last us a lifetime.

If Gerard had been honest with us and actually asked our opinion, we might have told him that he was putting his good name to .. well we’d rather not say less our post is redacted by our lawyers.

Anyway, it appears that Gerard has quietly become chairman of i-Display.

The profile pitches i Display / i-Display / Outform as “Bringing innovative new Intelligent Display solutions to the Digital Signage and Retail Advertsing Display Markets by exploiting mass-market consumer technologies (like the Android OS and associated ARM CPU technology) and applying it to the commercial M2M and B2B programmable and interactive display markets and media player computers”.

This is a strange mix and we don’t think it will last long.

†There’s a prize if you can tell us how many times we have used the word ‘disingenuous’ in the last seven days!

This entry was posted on Tuesday, May 22nd, 2012 at 00:53 @078 and is filed under DailyDOOH Update. You can follow any responses to this entry through the RSS 2.0 feed. You can leave a response, or trackback from your own site.

2 Responses to “Gerard Bucas Joins i Display As Chairman”