In its latest effort to help attract events, conferences and tradeshows, the Pennsylvania Convention Center [1] has just deployed a NanoLumens [2] Nanoflex LED Display, making it the third convention center in the U.S. to offer advertisers, meeting planners and show managers this digital signage technology that can bring vibrant digital messaging to just about any location throughout the convention center. 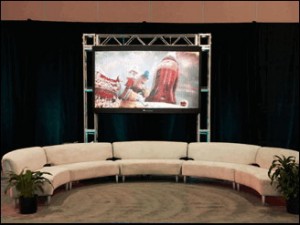 [3]“It’s important for us to offer our prospective meeting planners and show managers the latest display and advertising technologies because messaging, sponsorship opportunities and advertising are such huge components of trade shows and conventions,” says Gil Hall, strategic financial manager, Pennsylvania convention Center. “When I learned that two of the country’s largest convention centers were utilizing the NanoFlex display, I researched Nanolumens and recognized the huge advertising, business development and revenue opportunity, for both show management and the Convention Center.

“We have 100-plus digital displays throughout the convention center, but none like the NanoFlex, which is incredibly big and bright, and can be relocated to multiple sites with incredible ease on a daily basis. It allows us to offer meeting planners and show managers a massive mobile advertising and digital signage display that only two other convention centers in the country currently have. We’re promoting four ideal locations that will ensure the messages reach the maximum audience, and the responses we’ve received from clients and attendees have been overwhelmingly positive.”

One location for the NanoFlex display is right over the main entrance to the Exhibit Hall, which allows meeting planners and show managers to replace their traditional show banner signage with vivid videos, alternating static ads, advertisements and informational slides. This method of actively engaging attendees greatly increases the value of the space and commands attention from passersby, effectively generating greater message retention among viewers. 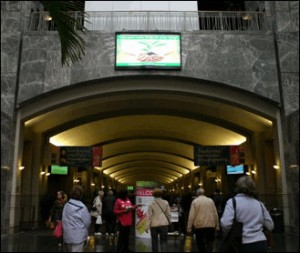 [4]“Shortly after we received the NanoFlex display, we put it to use during the week-long Philadelphia International Flower Show,” says Hall. “More than 250,000 attendees were able to see it for the first time. It was amazing to see how many people literally stopped in their tracks when they saw the display hanging over the spectacular hallway entrance to the Exhibit Hall.

”We plan to sell advertising to national and local businesses including restaurants, hotels, retailers, museums and other attractions. It’s the perfect opportunity for local businesses because many of the shows are so specialized that they provide a particular target audience, and they can design and tailor ads appropriate for their specific demographic. For the convention center, the NanoFlex display allows us to offer tiered display packages for show signage, sponsorship signage and advertising positioning. It is a premium enhancement that distinguishes a show or an ad and can really help set it apart.”

NanoLumens, located in Norcross, Georgia, has now recently created strategic partnership alliances with three of the largest convention centers on the east and southeast coast including the Pennsylvania Convention Center, the Walter E. Washington Convention Center [5] and the Georgia World Congress Center [6]. Combined, the three convention centers have an annual attendance of more than 3.5 million people and 7 million square feet of exhibit space.

The Pennsylvania Convention Center’s staff manages nearly 250 events each year. A recent $786 million dollar expansion has increased the size of the building by 62%, making it the 14th largest facility in the US with the ability to hold two meetings or conventions simultaneously and host mega tradeshows. Additionally, it provides the largest exhibit space and ballroom in the Northeast..

Designed and assembled in the United States, NanoLumens displays are available in both flexible and fixed frames in five product lines: NanoFlex, NanoFlex Wrap, and NanoFlex Ribbon flexible displays; NanoSlim fixed rectangular displays; and NanoShape fixed round, square, and triangular displays. The company’s technology has been recognized with numerous awards