SkyVue, the iconic observation wheel rapidly taking shape on the Las Vegas Strip, has completed the first phase of construction, is beginning its vertical climb and has begun excavation on its retail and dining experience. 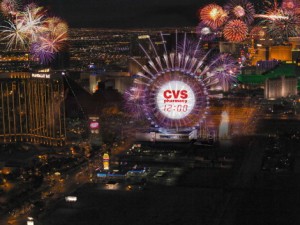 Upon opening, SkyVue will be the largest observation wheel in the Western Hemisphere and the first attraction of its kind in Las Vegas. Each side of the wheel will feature an LED screen – each measuring larger than a football field – that will be visible across the entire tourist corridor. The site will host concerts, sporting events, product launches and more.

Situated across from Mandalay Bay, SkyVue, with its 32 glass-walled gondolas, will deliver unobstructed panoramic views of the world’s most famous boulevard. Strategically located just north of the famous ‘Welcome to Las Vegas’ sign, SkyVue is expected to become one of the most photographed and recognized landmarks on the Strip.

The project will bring more than 700 construction jobs to the community in addition to an estimated 500 full-time positions once the development opens in Q4 2013.

This entry was posted on Monday, May 28th, 2012 at 10:00 @459 and is filed under Scuttlebut. You can follow any responses to this entry through the RSS 2.0 feed. You can leave a response, or trackback from your own site.