A recent Yahoo! [1] survey conducted by Ipsos MediaCT [2] says that people love their tablets so much that 1/3 of men frequently take theirs to the bathroom. No word on any similar move by women! Ed

Well, that’s not entirely true: Apparently one in four women would rather give up sex than give up their tablet, and almost 40% would give up their TV – err Gail where is this going? Ed.

What are the men doing with their tablets in the bathroom? Half are reading the news or emailing. The study also showed that 15% of Americans would give up their car to be able to keep their tablets and, get a load of this, 91% take their tablet to bed!

Tablets apparently run second behind desktops/laptops as the most fought over device in the living room. Less than 50% of survey respondents would be concerned seeing a child under five years old using a tablet. 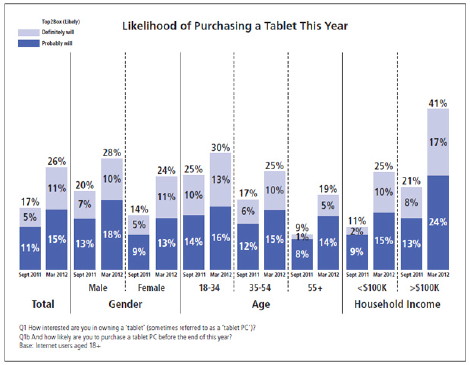 Recent studies by Ipsos MediaCT examining penetration and ownership of the Tablet PC shows dramatic increases. In fact, tablet ownership is now 16% among 18+ year olds and has increased across all demographic groups.

Based on recent research, Ipsos expects the tablet PC market to expand more dramatically in 2012 than last year, given that more than a quarter of U.S. online consumers say they are likely to purchase one before the end of the year.