Partial Victory For Astronomers In Phoenix

We followed up to find out what happened to the battle for and against digital billboards that were opposed specifically by astronomers in the Phoenix area. 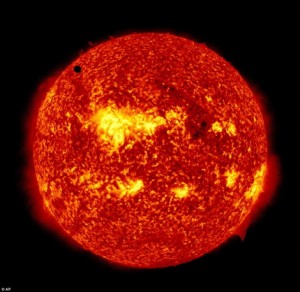 At last report, we knew that the state governor had vetoed a bill that would have permitted electronic billboards on state and federal highways – a victory for the astronomers and their supporters.

However – and we’re a little late reporting it – but we’ve now found that Arizona Gov. Jan Brewer approved a bill in May to allow some electronic billboards along state freeways in the Phoenix area.

This is expected to help Clear Channel Outdoor, American Outdoor Advertising and CBS Outdoor Inc. put up more digital billboards along Loops 101 and 202 and other state roads in the Valley.

Brewer signed into law House Bill 2543, which was passed in the latter moments of the recent legislative sessionm after having vetoed the previous, broader version that would have allowed electronic signs statewide. Astronomers worried that would hurt their work at observatories in Tucson, Safford and Flagstaff. The new industry-backed measure restricts illuminated signs near observatories, but allows the bright lights in Phoenix area.

There’s a provision in the approved bill that prohibits cities from enacting electronic billboard rules that are more restrictive than the rules set for state freeways. While a number of Valley cities have turned down or been skeptical toward electronic billboards. Arizona observatories support the bill inked by the governor.

This entry was posted on Wednesday, June 6th, 2012 at 08:00 @375 and is filed under Scuttlebut. You can follow any responses to this entry through the RSS 2.0 feed. You can leave a response, or trackback from your own site.