It has taken almost five years for a press release to drop into our inbox that we truly know something about – just a shame perhaps that it’s not really digital signage per se but somehow (probably ISE or IBC related) we are on the press distribution list for the Barco company High End Systems [1]. 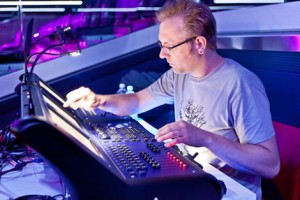 Now let me tell you about Tangerine Dream – a German electronic music group founded in 1967 and (despite lots of changes to line up) still going strong under the leadership of Edgar Froese.

Most people will never have heard of them but friends will know that I love to bore people with their history and their music.

Have you ever seen the film Risky Business [3]? Or how about other films such as Sorcerer, The Keep, Firestarter, Near Dark, Shy People, or Legend? If so, then you might never have actually heard of the band Tangerine Dream but you have certainly heard their music! 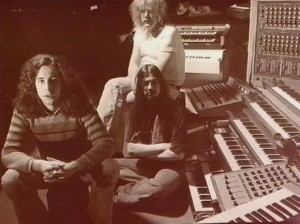 From left to right Michael Hoenig, Edgar Froese (back) and Christopher Franke (front) circa 1975

Anyway I digress (I did say I bored people on the topic – having something of an Eidetic memory when it comes to Messrs Froese, Christopher Franke, Peter Baumann, Johannes Schmoelling, Klaus Schulze etc. and their discography).

The DL.3 Digital Lights, which feature an on-board media server, allow Video Designer Michael Koschorreck to use his custom content in HD quality. “Incredibly, it was my first experience with Digital Lights from High End Systems,” he said. “The light output and quality of the images matched my imagination, and the real time access to all parameters – all I can say is wow. We placed the DL.3s on the road cases left and right side of the band; it was so easy!”

LD Fink points out that the DL.3’s Collage Generator feature – which allows the seamless merging of multiple DL.3 units to project one panoramic image – is ‘the simplest’ way to quickly manage displays across big screens using more than one projector. They mostly used a projection size of 12 x 5 meters (39 ft by 16.4 ft) to enhance the music using non-specific images, concentrating on movement and textures.

Fink was also able to create intensive looks with the SHOWGUN 2.5s (spot luminaire) and SHOWBEAM 2.5s (wash luminaire), using them as back lights – even in performance venues which allowed no smoke or haze.

Tangerine Dream’s European tour ended May 10, with their next leg starting June 24 in London (and err I WILL BE THERE) and then the group heads to North America June 30 (including a stint at the Montreal Jazz festival) and runs through the U.S. during the summer.

The photo of TD is in fact from 1975 the lineup shows (L-R) Michael Hoenig, Edgar Froese and Christoph Franke. Michael was Peter’s replacement for TD’s 1975 Austrailian Tour and a one-off concert in London, by which time Peter had returned and Hoenig left the band.