A number of the big outdoor folks in the UK flagged up this campaign to us late last year when it first ran – there was some controversy as to whether media owners should have run the campaign but luckily common sense and free speech prevailed and ‘The Atheist Bus Journey’ was allowed to roll!! 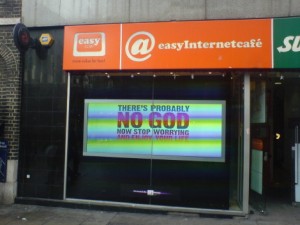 Anyway the first time around there was no digital but it looks like the folks behind the campaign have raised enough money to buy ads again on 800 buses across the UK and throw in some digital as well which we especially went to see for ourselves yesterday in London.

The two digital screens taking part in the campaign are both part of Eyeconic Outdoor’s WindowGain installation in Oxford Street which we have written about many times before, first when the installation went live and a couple of times since as well.

This is really a very good installation, whichever way down Oxford Street you walk, you tend to notice the screens (and of course it is an incredibly high footfall area) and when you come out of Bond Street Tube Station (across the road) you notice it as well.

The screens were also running adverts for the forthcoming London Boat Show.

Today, thanks to many Cif readers, the overall total raised for the Atheist Bus Campaign stands at a truly overwhelming £135,000, breaking our original target of £5,500 by over 2400%. Given this unexpected amount, I’m very excited to tell you that 800 buses – instead of the 30 we were initially aiming for – are now rolling out across the UK with the slogan, “There’s probably no God. Now stop worrying and enjoy your life”, in locations all over England, Scotland and Wales, including Manchester, Edinburgh, Glasgow, York, Cardiff, Devon, Leeds, Bristol and Aberdeen.

From today’s launch, two hundred of the buses will run in London, because the campaign was originally started as a positive counter-response to the Jesus Said ads running on London buses in June 2008.

These ads displayed the URL of a website which stated that non-Christians “will be condemned to everlasting separation from God and then you spend all eternity in torment in hell … Jesus spoke about this as a lake of fire prepared for the devil”.

Our rational slogan will hopefully reassure anyone who has been scared by this kind of evangelism.

In addition, we’re running adverts on two further types of media. In my last Cif blog on the campaign, I asked Cif readers for ideas on alternative ways to spend the funds, and also for thoughts on different slogans. Commenters WoollyMindedLiberal, PaoloV and Catch22 suggested that we use quotes from famous freethinkers, and we’ve done just that: from Monday January 12, 1,000 tube cards will run on London Underground featuring atheist quotations from Douglas Adams, Albert Einstein, Emily Dickinson and Katharine Hepburn, alongside the original campaign slogan.

An animated version of the slogan will also appear on two large LCD screens on Oxford Street (opposite Bond Street tube station), so that you can see the advert live without having to wait for an atheist bus. And, to thank all donors and show the strength of atheism in the UK, every ABC advertisement will contain the line “This advert was funded by public donations”.

Amazingly, the campaign has now gone international. Spain’s Union of Atheists and Freethinkers are launching buses across Barcelona today with a translation of our slogan, Italy’s Union of Atheist, Agnostics and Rationalists are also planning to roll out atheist buses, while the American Humanist Association have been inspired to launch a campaign, and buses carrying their slogan “Why believe in a God? Just be good for goodness’ sake” have now been running for over a month in Washington DC.

Sadly, not every country has been so open to the idea: the Atheist Foundation of Australia tried to place the slogan “Atheism – celebrate reason” on buses, but were rejected by Australia’s biggest outdoor advertising company.

The campaign’s success is thanks to Cif and Cif readers. If Matt Seaton hadn’t allowed me to run with the idea here, and so many of you hadn’t been so enthusiastic about it and donated generously to it, it would never have happened. There may be further campaign developments, and the campaign website and Facebook group will be regularly updated with the latest news; but for now, I hope you enjoy seeing the adverts on the streets, and that they brighten these bleak January days just a little bit. As Charlie Brooker – one of the first people to donate to the Atheist Bus Campaign – says: “Public transport in Britain suggests there isn’t a God anyway, but in case anyone hasn’t noticed, or feels isolated for thinking such a thing, this campaign should help.” I hope it does.

This entry was posted on Friday, January 9th, 2009 at 12:10 @549 and is filed under DailyDOOH Update. You can follow any responses to this entry through the RSS 2.0 feed. You can leave a response, or trackback from your own site.