Retail company real, a member of the METRO Group is working with echion AG [1] on a nationwide digital signage rollout in the German food retail market. 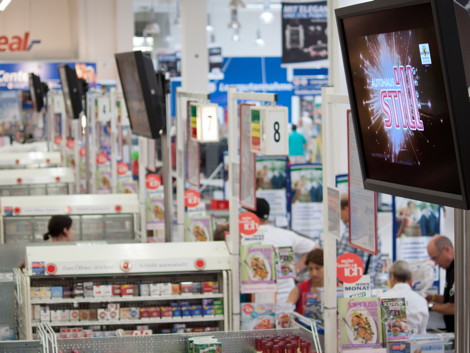 All 300 real hypermarkets in Germany will be equipped with an advertising network before the end of the 2013, starting off with five early locations; two in Mönchengladbach and one each in Augsburg†, Hameln and Nuremberg

Within the next ten weeks we believe that 50 more will be deployed.

Michael Kimmich, Chief Executive Officer of echion told us “We will be elevating the concept of in-store communication to a different and absolutely new level”

At the center of the deployment is the check-out zone at the Point of Sale – on average, four displays will be installed in this area (though to us, just judging by the pictures the screens look a little high).

Responsibility for marketing of the advertising network lies solely with the in-house echion in-store communication specialists.

Michael Kimmich told us “The most striking advantage of the specialists from Augsburg is the fact that the food retail market and particularly the customers of real,- are very well known to them. After all, they built and developed the successful in-store radio of the hypermarkets in Germany and have been supervising it for over 10 years”.

Local advertisements can be booked in a targeted manner based on time and location – individual spots last for 15 seconds and will be aired at least 12 times per hour.

†Später am selben Nachmittag from Monty Python; “And while the good folk of Happy Valley tenaciously frolicked away, their wise old king, who was a merry old thing, played strange songs on his Hammond organ all day long, up in his castle where he lived with his gracious Queen Syllabub, and their lovely daughter Princess Mitzi Gaynor … and an enchanting smile and a fine wit, and wooden teeth which she’d bought in a chemist’s in Augsburg, despite the fire risk. She treasured these teeth, which were made of the finest pine and she varnished them after every meal”.