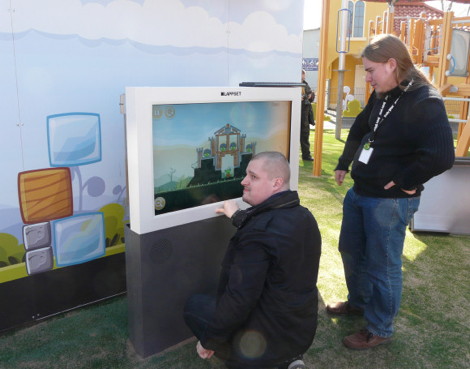 "I think we might have put this screen too low"

Symbicon’s Satu Röppänen [2] tells us “It is fitting that the first Angry Birds Land was opened in Finland in June, 2012 as the angry birds game was made by Rovio”.

"No, I told you the screen was too high"

She added “The adventure course and playground structure was made by Lappset and interactive IconOne outdoor displays were made by Symbicon; all three are Finnish companies”.

Angry Birds Land features a dozen full-fledged rides centered around their ‘furious fowl’ (their words not ours) and an ‘adventure course’ that looks like the playground straight out of the wildest Angry Birds’ dreams (again, their words etc.).

It’s part of Särkänniemi Adventure Park in Tampere in Finland (Tampere is about two hours due-north of Helsinki in southern Finland).