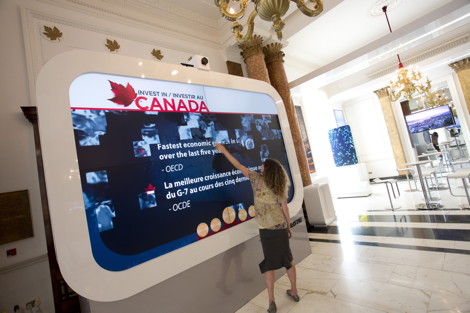 Canada Olympic House is the Canadian Olympic Committee’s space for athletes, their friends and their families, a place to host business leaders and government dignitaries as well as a showcase for Canada’s leading industries and businesses (it’s only in operation from 27th July to 12th August).

Christie is among the select technology companies invited to participate and have supplied a large lobby display of up to 37 Christie MicroTiles and four 72” diagonal Entero cubes (the world’s first LED-based ultra-high resolution projection display system) for the Business Club, site of numerous networking events throughout the month. 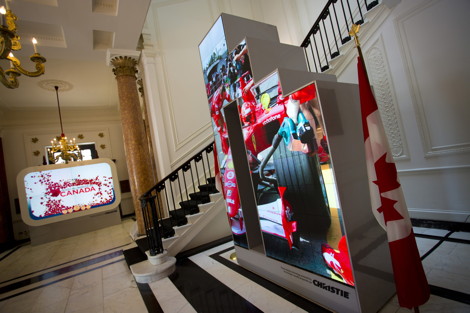 Kathryn Cress, vice president of Global and Corporate Marketing at Christie told us “From award-winning games and visual effects, to digital cinema and e-commerce, to wireless and mobile applications, Canada is an important player in the global economy”.

She continued “As a major contributor to Canada’s technology revolution with manufacturing facilities in the Waterloo Region, Christie is proud to bring its expertise to Canada Olympic House to help further the country’s strategic expansion upon the world’s digital stage.”

According to the government of Canada, Canada’s digital industries are a robust and rapidly advancing sector, with 32,700 companies, more than half a million employees, annual revenues in excess of $162 billion and annual exports of $26 billion in 2010. Profiling these activities is part of the government’s economic strategy to create conditions for businesses in Canada to succeed on a global scale.

This entry was posted on Monday, July 30th, 2012 at 15:19 @680 and is filed under DailyDOOH Update. You can follow any responses to this entry through the RSS 2.0 feed. You can leave a response, or trackback from your own site.