If you are looking for Scala Canada [1] in the future, please call Dot2Dot Communications [2].

Dot2Dot has taken over as Canada’s sole Scala distributor – but when you know what’s involved, it makes a lot of sense. 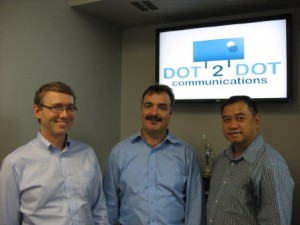 The entire Scala Canada team of eight is now at Dot2Dot, owned by Andy McRae, general manager; John Devonshire, client services manager, and Richard Tso, an entrepreneur with a software background who set up Dot2Dot a year ago as he was getting into the digital signage business.

And if you are looking for Nancy Biglow, marketing manager, Tania Phillips, account director, and the rest of the Scala Canada crew you’ll find them all at Dot2Dot, along with two developers and a creative director from Doto2Dot – and we know that the company is now looking for sales and services people, Ed.

Think back: in 2008, Scala wanted to get involved with campaign management, so bought Ad Manager from Market Information Services of Canada (MISC), which had developed it and McRae, as general manager, and others moved from there to Scala.

Now, as Dot2Dot, the same people have both bought Ad Manager from Scala and will both offer Ad Manager directly worldwide as well as act as sole distributor for the entire Scala product line and services.

“Over the past three years, Ad Manager wasn’t doing as well because the focus was more on digital, but now ad based networks are doing better and the focus moved over to Ad Manager,” says McRae. “Scala wanted to put it it the hands of people who knew it well and could support it well, so we bought it outright. It’s back in the hands where it started.

“It‘s a great move for Scala partners and clients. Everything, all relationships for them remains the same. Nothing for them has changed except our name. And we have the opportunity to push Ad Manager globally along with all the other Scala offerings.”

The timing for the move is also right. The Scala team had to move, because the office building was being torn down to make room for construction of condos, so the team has moved to Dot2Dot’s existing offices in Scarborough (part of the Greater Toronto Area).

“We’ll be very much focused on ad based networks,” says Devonshire. “And we’ll be very integrated with everything at Scala. It’s basically a management change.”

“It’s a positive move for the group as entrepreneurs,” says Tom Nix, Scala’s CEO. “And as for Ad Manager, it’s positive for the product because it will have more flexibility to address market opportunities for digital signage.”