AWESTRUCK’s VH1 ‘Pop Up’ Augmented Reality at US Festivals

To celebrate the launch of the new season of VH1‘s Emmy Award-nominated music video franchise ‘Pop Up Video’ last week, New York-based AWESTRUCK was approached to develop an engaging and entertaining real-life experience to tour music festivals for VH1. 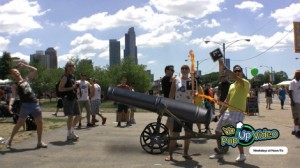 For the first time, VH1 and AWESTRUCK Marketing Group brought the fun of Pop Up Video through an Augmented Reality Experience to Lollapalooza 2012 by putting attendees in the spotlight as stars of their own videos.

“VH1 came to us to help them develop an experiential marketing program to re-launch their Pop Up Video franchise in a big way,” says Joel Arnold, vice-president creative director, creative and client strategy at AWESTRUCK Marketing Group.

“Our thought was to offer consumers the opportunity to put themselves into a pop up environment and then to take it a step further by extending the pop up factoids everyone associates with Pop Up Video into mini-experiences to further engage consumers with these core elements, of the franchise. The Pop Up Video Augmented Experience is unlike any other that we’ve seen to date.”

AWESTRUCK custom designed an experience that employs customized tactics that drive consumer awareness and interaction as well as creating an impactful and innovative story to garner buzz with its loyal audience. The experience was designed using dynamic Augmented Reality software. Though other brands have undertaken AR experiences, the VH1 program is believed to be the first that allows multiple consumers to engage in Augmented Reality in such a large scale at a live event in the US. While the technology for this event exists across multiple developers, the difference here is the vast capability of the App and the activation of more than 100 Augmented Experiences within the program. 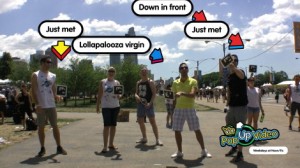 A huge Pop Up Video branded screen allowed consumers to step into the world of Pop Up Video at the. The giant branded digital video screen, with an integrated camera and software, caught the action in the footprint in real-time, broadcasting everything in the area live on screen. Consumers were handed ‘markers’ (a VH1 branded paddle fan that they could keep) that the Augmented Reality used to identify where they were as they entered the space and interacted with elements on the screen in front of them. There were several different types of Augmented Reality experiences or POPS being used for this campaign. The experiences included location and consumer based POPS, marker replacements, artist animation and video animations.

“The experience is totally multi-user and activates on a large format digital screen making any barriers non-existent, you just need to be there,” says Arnold. “All a user has to do is walk into the frame holding a marker. Our App recognizes markers, tracks users, replaces markers and reacts to their movement’s, which makes this experience the most dynamic multi-user augmented reality engagement created to date.”

“We cannot thank VH1 and the Pop Up Video Team enough for taking risks and being truly willing to push the boundaries in experiential marketing with us at AWESTRUCK and for the organizers at Lollapalooza for letting us premier it at their festival,” says Robin Potash, AWESTRUCK president,

Building off the success of Pop Up Augmented Reality Experience at Lollapalooza, VH1 will be traveling to the Summer MixTape Fest on Aug 17 and 18, 2012, at the Hershey Park Stadium to give attendees there the chance to experience it for themselves, too.

“The experience has been so successful and well received, we are very excited to be taking the event to a new crowd at MixTape,” says Stephanie Werner, VP VH1 Consumer Marketing Partnerships and Promotions. “We are extremely happy with the results and development of the program. It really show why AWESTRUCK makes a great partner for us at VH1.”

The Summer MixTape Fest, the major new music festival set to launch this summer, will be celebrating the mainstream music scene from across the U.S. Featuring two stages over two days and presenting platinum-selling marquee acts, popular acts will include Kelly Clarkson, The Fray, LL Cool J, Carly Rae Jepsen, The Ready Set, New Kids on the Block and highlight the ONLY North American appearance of NKOTBSB in 2012.

This entry was posted on Tuesday, August 14th, 2012 at 17:00 @750 and is filed under Scuttlebut. You can follow any responses to this entry through the RSS 2.0 feed. You can leave a response, or trackback from your own site.