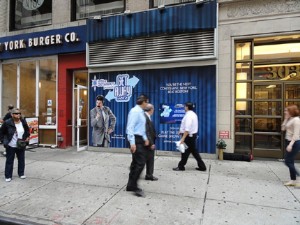 The interactive show, deployed in New York and Boston to play on the already existing rivalry between the cities, used the Interactive experience across three platforms: Interactive storefronts; Interactive kiosks; and Interactive bus shelters.

Contestants were tested on five trivia questions and their accumulated points were added to their respective city’s point total. Also included was a QR code for a chance to register for The Live Game Show (a real one).

Last we saw, Boston was leading New York, but we don’t which city won. Let us know if you do.

This entry was posted on Tuesday, August 14th, 2012 at 16:00 @708 and is filed under Scuttlebut. You can follow any responses to this entry through the RSS 2.0 feed. You can leave a response, or trackback from your own site.