An In-Depth Study On Mobile Entertainment

The amount of entertainment content accessed on mobile devices increased 82% from December, 2010, to December, 2011.

That’s one of numerous facts and figures in the latest Millennial Media / comScore Study which goes in great depth on the entertainment sector.

The mobile entertainment audience is made up of consumers who frequently engage with entertainment content and ads on their mobile devices. Consumers are using mobile to access movie information, view trailers, and buy tickets; to check TV show times and engage with mobile social media sites during shows; and to pre-order and buy DVDs, video games, and digital downloads.

The extremely in-depth report covers both what entertainment advertisers are doing, as well as what makes the audience that consumes mobile entertainment content unique.

Among points noted in the study: 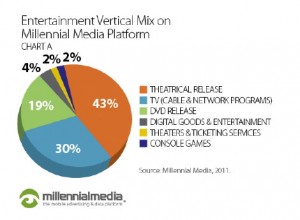 Sustained In-Market Presence (16%) and Brand Awareness (9%) were the second and third most popular campaign goals for entertainment brands.

The study found that Entertainment campaigns must run across all mobile platforms to reach fans wherever they are. Entertainment fans access content across a variety of devices and operating and effective mobile advertisers take advantage of this fact by running cross-platform ad campaigns – across multiple device types and operating systems – to connect their brands with audiences, not just devices. Brands who run cross-platform campaigns are able to reach consumers at great scale, regardless of whether their target audience uses a smartphone, tablet, mobile-web-enabled feature phone, connected gaming device, e-reader, or any one specific carrier.

Nearly one-third (31%) of entertainment campaigns that ran with Millennial Media in 2011 used some form of content-based audience targeting. By targeting consumers based on the types of mobile content they consume, campaigns using this type of targeting can help advertisers reach fans reading entertainment news, moms visiting parenting apps and sites, music fans browsing music news, reviews, listening to streaming music, and more, on their mobile devices.

The report ends with a suggested Top 10 Action Items for Entertainment Brands.

This entry was posted on Thursday, August 30th, 2012 at 10:00 @458 and is filed under Scuttlebut. You can follow any responses to this entry through the RSS 2.0 feed. You can leave a response, or trackback from your own site.