AccentHealthTV, one of America’s largest waiting room television networks – airing to 173 million annual viewers in over 12,000 doctor’s waiting rooms nationally across the US – has, in partnership with Drug Store News, released results from a survey detailing the patient decision-making process when choosing a pharmacy – and what might cause them to switch. 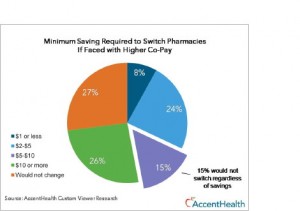 AccentHealth survey panelists visit the pharmacy 65% more often than the general population, so their insights are a valuable tool for pharmacy retailers looking to reach their most significant consumer, the patient. The company partnered with Drug Store News on a series of reports to get this info to pharmacy retailers.

“Convenience is king when choosing a pharmacy, but pricing consideration is a key secondary driver – so much so that 85% of patients surveyed report they would switch from their preferred pharmacy for some degree of cost savings at another retailer if their co-pay were to increase,” says Natalie Hill, vice-president market research at AccentHealth. (Co-pay is the amount charged to the consumer at the pharmacy level that is not covered by their personal or government health plan.)

“AccentHealth panelists fill 63% more prescriptions annually than the average consumer, reinforcing why this audience is so pertinent to the pharmacy industry,” says Hill.

“People have been watching AccentHealth’s health education programming in their doctor’s office since 1995,” says Andrew Schulman, vice-president marketing. “Our patient panel is engaged with AccentHealth, allowing us to understand how pharmacies are selected by the key pharmacy constituent, the patient.”

Some of the points in AccentHealth’s survey include:

Since AccentHealth viewers frequently leave their doctor’s office with a prescription, the survey results are particularly relevant to retailers. There is also marketing relevance due to the national discussion on the direction of healthcare, including that more health services such as vaccinations are being offered outside of Doctor’s offices.

This entry was posted on Thursday, August 30th, 2012 at 09:59 @458 and is filed under Scuttlebut. You can follow any responses to this entry through the RSS 2.0 feed. You can leave a response, or trackback from your own site.