Astral Media screens were as prominent as the dancers as Virgin Radio Montreal was launched officially at an agency and media party Monday night (Jan. 12). 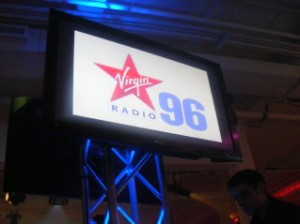 Some screens showed a selection of Montreal scenes interspersed with Virgin Radio 96’s logo, while others showed scenes from other countries where Virgin Radio operates. The noisy atmosphere was enhanced by exotic dancers in various costumes, stalls offering foods from Virgin Radio countries, the inevitable bars, and, of course, introduction of the various program hosts.

The 32-year-old Mix 96, the most listened to English-language radio station in Montreal has evolved to become the new Virgin Radio 96. This is the fourth Virgin Radio station Astral Media has launched in Canada as part of a commercial association entered into by Astral Media Radio and Richard Branson’s Virgin Radio International. The others are in Toronto, Vancouver and Ottawa.

Virgin 96 is being launched with an ad campaign including billboards and other Astral Media Outdoor properties, TV, the Web and a Facebook platform, along with a Virgin Radio $20,000 Liars’ Club promotion.