Just in time for back to school, Baton Rouge, Louisiana-based Lamar Advertising Company [1], and TeachersCount [2], based in New York, have teamed up on an ongoing basis to recognize teachers and highlight the impact that educators have on their students and on our country. 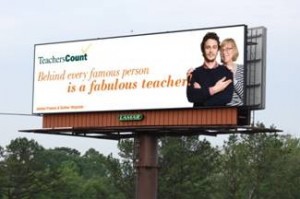 [3]TeachersCount is a non-profit organization whose mission is to raise the status of the teaching profession in America and to provide resources to the education community. To help it succeed, Lamar Advertising has committed millions of dollars of media space on its digital billboards nationwide.

“Teachers are the backbone of our nation,” says Sean Reilly, CEO, Lamar Advertising Company. “We are proud to support TeachersCount and hope to draw attention to the critical role that teachers play through this partnership.” 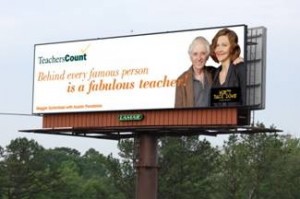 [4]Lamar Advertising Company and TeachersCount kicked off the partnership with a ‘Behind Every Famous Person is a Fabulous Teacher’ campaign. Digital billboards display celebrities with their favorite teacher in an effort to expose the undeniable impact that our nation’s teachers have on their students. Taye Diggs, Edie Falco, James Franco, Maggie Gyllenhaal, Wynonna Judd, Miranda Lambert and Carrie Underwood are in the first round of celebrities featured on the digital billboards. Up to 30 other celebrities and their teachers will run on billboards in the coming months as part of the national initiative.

“With over 49.4 million students attending public elementary and secondary schools and 3.7 million full-time-equivalent elementary and secondary school teachers returning in the fall of 2012, the need to retain and recruit, as well as recognize our nation’s educators has never been more crucial,” says Diana Burroughs, executive director of TeachersCount. “We are truly grateful to have Lamar Advertising Company’s support.”