Posterscope, working in conjunction with Mindshare, JWT and Pragmatica, have delivered an interesting NFC campaign on static 6-Sheets with JCDecaux, Clear Channel and Primesight in the UK. 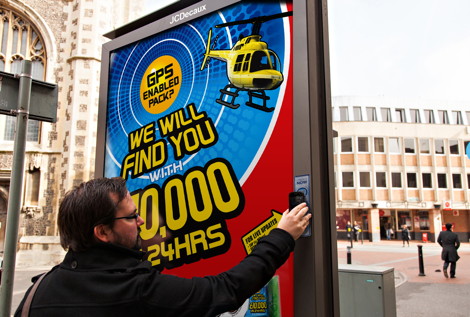 Nestlé have seeded the UK market with six chocolate Kit Kat bars fitted with a GPS tracker and with a slightly Orwellian slant, the promotion, dubbed ‘We Will Find You’ is dependent on the consumers who discover the winning bars activating the GPS device at which point a team will be dispatched to deliver a £10,000 prize directly to the winner (picture here Robert De Niro as heating engineer Archibald ‘Harry’ Tuttle arriving at the winner’s abode [2])

Over 3,000 six sheets have been fitted with NFC/QR Touchpoints that will direct users to live competition updates and the opportunity to enter a secondary competition with an on-pack code via Facebook.

Smartphone interactions are designed to drive users to a mobile landing page which hosts updates on the number of GPS bars left, thus allowing consumers to interact with the promotion via their entire OOH campaign.