We had a chance to talk yesterday to Meghan Athavale, the co-founder and CEO of PO-MO Inc., a young company in the Canadian city of Winnipeg that’s trying to do big things in terms of transforming spaces for events and promotions using interactive projections on buildings, augmented reality display solutions, gesture controlled displays, and dynamic lighting design to provide users with new and engaging experiences. 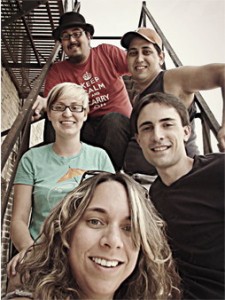 When we talked, Athavale was in New York making contacts and looking for strategic partners among the world of agencies and brands that could help guide the company in its growth – sounds like Meghan is four weeks too early, the DPAA Digital Media Summit and #DSInvestor would be ideal for what she’s looking for, Ed

PO-MO is one of six companies chosen for the first Canadian Technology Accelerator initiative (CTA @ NYC) announced by the Canadian Trade Commissioner Service. Its aim is to provide Canadian digital media entrepreneurs with access to unique resources and contacts to accelerate the growth of their start-up on a global scale. All companies chosen had to be product-ready digital media start-ups with high growth potential and a strategic interest in the New York City market. As part of the benefits of a three-month stint in New York, the Canadian Tech Accelerator program assists with introductions to experienced mentors, and business and investor contacts.

Athavale and co-founder Curtis Wachs, CTO, formed PO-MO in 2010, launched its PO-MOtion platform officially last May, and are now set to launch an advanced version of its product, which, among other things, will allow remote control of a retailer’s promotional display in every retail outlet, rather than the local control of its current product.

We first became aware of some of PO-MO’s projects via its web site which shows, among other displays, the Impossible Animals Museum Exhibit done for the Manitoba Children’s Museum. Po-Mo and the Museum designed an exhibit featuring interactive 3D animals. In it, children color an egg on a piece of paper, scan it, and choose where their egg will hatch. A 3D robot delivers their colored egg to a 3D environment, and they touch the egg to make it hatch into a motion and touch reactive animal.

The children interact with their animal on the floor or wall, and, with every touch, they make the animal do something different: fish swim away, birds flock and drop feathers when touched, land animals follow the children and spawn hearts. A ‘reset the world’ button allows museum staff to easily reset the exhibit once a day so the world is fresh in the morning.

“We have done a lot of educational projects, but we realize that we have to shift our focus more to the advertising sector,” says Athavale, whose background is in animation in interactive game design, while Wachs’s background is in programming.

“Our platform allows advertisers to track all their stores, the engagement with content, age, direction, demographics,” says Athavale. “They can set their own metrics. In November, we’ll launch the platform for the retailers and resellers level. It will allow clients to create higher resolution content and include social media extensions and other additional features – as well as to subscribe to the remote content management.”

We asked Athalone if she’s looking for investors.

This entry was posted on Tuesday, September 18th, 2012 at 07:32 @355 and is filed under DailyDOOH Update. You can follow any responses to this entry through the RSS 2.0 feed. You can leave a response, or trackback from your own site.