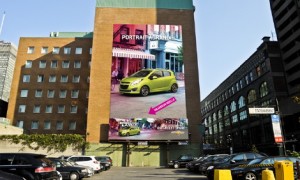 The unique, mixed format of this hard-to-miss mural, located at the intersection of rue de la Montagne and de Maisonneuve Blvd. West, is exclusive to Pattison in Montreal

Situated in a mixed business and retail sector and close proximity to high-end department stores (Ogilvy’s and Holt Renfrew) and luxury hotels, this wall mural commands the attention of business professionals and fashionistas, as well as the nightlife crowds that frequent the numerous bars and restaurants in the area.

On the same site as this innovative mixed mural-spectacular, there are also two 10’h x 20’w Horizontal Posters and a second Spectacular, providing advertisers with a unique opportunity to deliver highly impactful campaigns. With so many options available, advertisers virtually cannot miss reaching their target audience in this location.

“This area is a real hot spot, teeming with thousands of people circulating in downtown Montreal daily for work or entertainment,” says Dominic Loporcaro. Pattison vice-president general manager, eastern region. “Our new mural is a significant asset to all of our advertisers and we are thrilled to finally be able to offer it.”

First client on the new mural is General Motors. Creative is by The Commonwealth Agency Inc., with media by Carat.

Pattison also offers four other murals in the city: one each in the East End; near the Montreal Convention Centre; in the Business District; and in the Little Italy/ultra-hip ‘Plateau Mont-Royal’ district.

This entry was posted on Wednesday, September 19th, 2012 at 06:59 @332 and is filed under DailyDOOH Update. You can follow any responses to this entry through the RSS 2.0 feed. You can leave a response, or trackback from your own site.