When we last talked to Rich Maddy [1], CEO of Clean View Media Network [2], about 10 months ago, he appeared ready to launch his DryerAds into laundromats across the U.S. after beta testing. 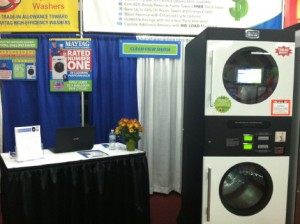 And it’s a good lesson for others how it’s important that have all your ducks in a row before swimming into the market.

Now the self-financed company is really ready to roll, currently doing the trade show circuit and planning to hit the ground running across the U.S. early in the new year.

DryerAds is a digital screen set between the two panes of glass in the front of clothes dryers in laundromats. The screen offers advertising, information, games and promotions, and can accommodate QR codes

“We had delays, including the fact that our contracts weren’t all signed, but our main problem was that we had to change our hardware,” says Maddy. “We had been using an Android tablet and found that it just wasn’t working the way we wanted. We’ve now switched to a different tablet, upped the screen size from 10” to 15”, and are using a media player set into the dryer control panel.” (Maddy didn’t want to name the media player as it’s still being finalized.)

“We’re now showing at trade shows. We just did one in Minneapolis for BDS laundry systems and had 97% positive response rate, even though we only showed the 10” screen,” says Maddy. “We’re scheduled to be at other shows in Palm Springs, Houston and Philadelphia before year end.”

Until now, the testing with the new hardware has been in seven locations in California.

“We wanted to keep everything close for testing, because we wanted to get everything just right,” he says. “We’ve been doing successful promotions, including the Pink Elephant one we did last year on our earlier tests (the only one for which you need a smart phone to interact). And the screen includes a place for an ad by the local laundromat owner which can take the viewer to a phone app which can include an informercial, a video how to use the equipment, even a refund request. Everything will be centrally controlled from our headquarters in Santa Cruz.”

The best thing about the future deployment is that the company has a contract with American Dryer Corporation [4] distributors (ADC dryers are deployed in 90 countries including right across the U.S.), and is making arrangements with individual Maytag [5] distributors.

“We were right next to the Maytag booth at the show in Minneapolis, and they really liked our product,” says Maddy. “And while we will go into new dryers, DryerAds also can be installed in existing dryers, as long as they have a metal door.

“We’ve expect to be into the top 10 DMAs, as well as Minneapolis and Sacramento very quickly.”

We’re looking forward to meeting Maddy in person in New York where he’ll be attending both the Digital Signage Investor Conference [6] (Ict. 17-18) and the DPAA Digital Media Summit [7] (Oct. 16).