The Where, Why and How Of FireRescue TV

Yesterday, we discovered an interesting new ‘vertical’ digital out-of-home network that has been quietly operating and growing over the past year-and-a-half, and, we expect, is so far unknown by almost everyone except its targets and advertisers producing products for those targets. 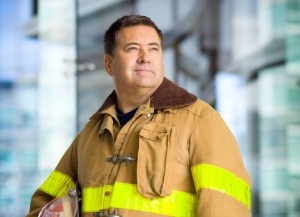 FireRescue TV is a digital TV network which is actually three channels, with a fourth to launch in Q2 2013.

The current targets of the channels are: fire departments and their personnel; emergency medical services (ie. first responders); firehouse-themed restaurants; and – to launch next year – law enforcement.

Martin Grube, founding partner and executive producer, is a fireman, retired after 35 years, who researched the company’s possibilities and what was needed for 10 years. The idea came to him as he and his colleagues at Fire Station 13 in Virginia Beach stood silently watching the World Trade Center collapse on Sept. 11, 2001. Three years ago, he approached his friend Ernie Hux, president of Satellite Communication Systems Inc., and the two partners set up the self-financed company.

“I thought at first we could operate what I envisioned by satellite, but it proved expensive, so I then researched the digital signage sector, which offered the best ways of reaching firemen and first responders,” says Grube.

The company now has screens in various states of install in 250 fire departments in North Carolina, South Carolina, Maryland, Mississippi, Illinois and Wyoming, as well as moving into a number in EMS locales and restaurants. (One restaurant in Myrtle Beach has asked for four screens.) The company also just received requests for 63 screens to be installed in Maryland in January, 2013, and another 20 for stations in Kentucky.

In the fire stations, the 42” screens are usually in a common area, often the kitchen where it doesn’t compete with traditional TVs. The company uses hardware from U.S. firm World Media Net and Audience software from Capital Networks in Canada.

All content is developed in-house, usually in two-, four- and six-minute segments. These include information on fires underway around the U.S. (usually up about 30 minutes of receiving the news); training videos; new product information; and entertainment that includes fire station histories, fire station coking, fitness and nutrition. There arew also a news ticker, three-day weather forecasts and wind information. Individual fire chiefs or restaurant owners have the opportunity to add their own messages. 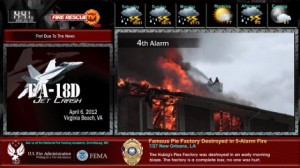 We asked Grube how the company gets news of fires and other information quickly. “We have 150 reporters: off-duty fire fighters who feed us the information,” says Grube. The staff also includes, among others, 17 sales people. In-house staff includes Ernie Hux Jr. in operations and Jennifer Hux in marketing, the son and daughter of Grube’s partner.

The other targets get similar information as the fire stations. Firehouse-themed restaurant patrons might see messages similar to those of the EMS targets. eg., how to deal with jellyfish stings.

“We have lots of potential for growth,” says Grube. “There are 64,000 fire stations, 33,000 EMS centres and at least 40,000 police stations and sheriff offices in the U.S. alone, and we’re all ready to go into Canada and globally. Dealing with fires is a worldwide concern. We’ve already had interest from Dubai.”

This entry was posted on Tuesday, September 25th, 2012 at 07:12 @341 and is filed under DailyDOOH Update. You can follow any responses to this entry through the RSS 2.0 feed. You can leave a response, or trackback from your own site.