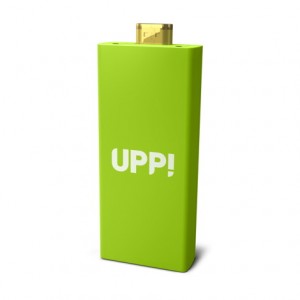 [1]MMD (the brand license partner for Philips Public Signage) are hoping that UPP! – a device which weighs a mere 90 grams, will “revolutionise the communication of products and services via digital signage”.

UPP! is an Android media player that can be plugged into Philips Public Signage displays, enabling users to control depicted texts and messages via WiFi.

It also allows content to be managed, organised and updated with Android smartphones, tablets or other PCs.

Getting started, we are told, is easy:

At the heart of the UPP! device is an ARM Cortex-A8 processor and 1 GB of DDR3 RAM running Android 4.0. UPP! supports all the important video codecs with its 1080p HDMI connector and has additional USB, TransFlash (MicroSD) and Mini USB ports.

The UPP! is available exclusively with the Philips Public Signage displays and is distributed under the model number BP04120/00.