For the first time since the program ‘Times Square Moment: A Digital Gallery’ began in May, a film specially created for Times Square’s screens was featured last night on multiple Times Square screens. 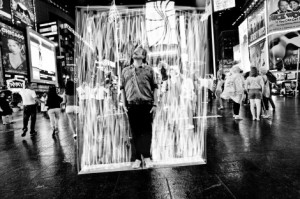 The new, site-specific work, entitled Universal Pulse, was created by Brazilian public artist Bel Borba, along with acclaimed filmmakers Burt Sun and Andre Costantini. It will show nightly from 11:57 pm to midnight throughout the month of October.

The film is a central element in Borba’s creative journey to New York City this fall, entitled ‘Bel Borba Aqui New York’, in which he has transformed the City into his newest studio and, in October, will make Times Square his base.

The “Times Square Moment: A Digital Gallery” will host free screenings of Universal Pulse every night throughout the month of October from 11:57 pm to midnight.

“After only six months since the program’s inception, a world-renowned artist has created a work specifically to be shown on the screens of Times Square,” said Alan High, chairman of the Times Square Advertising Coalition and president of Clear Channel Spectacolor and Clear Channel Malls. “We are delighted to offer this singular canvas for creativity and innovation, which can only be found in the world’s most famous location at the Crossroads of the World.”

“The film Universal Pulse will transport the viewer, while watching the screens in Times Square, to a whimsical parallel universe as seen through our eyes,” says filmmaker Burt Sun.

“Bel Borba – known as The People’s Picasso – has transformed his native city of Salvador, Brazil with his contagious energy, and now he brings his unique perspective to the screens of Times Square,” says Sherry Dobbin, director of Public Art at the Times Square Alliance. “In Universal Pulse, the artist teaches us to see something new about what we encounter every day, from the paving of our city streets to the subways that pass us underground.”

The picture seen here shows a Bel Borba’s art installation developed in Times Square as filmed and now seen for the nightly viewing.

For the grand finale of his month-long public art project DIÁRIO, Bel Borba will return to Times Square, using orange street barriers and other recycled materials to create a block-long installation in Times Square in one day – giving visitors the chance to see an internationally-renowned public artist in process. Bel Borba will create the installation in view of the public Sunday, October 14th starting at 6:00am, installing it in Times Square for a 24-hour viewing before disassembling it on Monday, October 15th.

This installation will marks the last day of his 30-day series of transformations with recycled materials around New York City and is presented in partnership with the French Institute Alliance Française and the Hemispheric Institute of Performance & Politics, as part of FIAF’s 2012 Crossing the Line festival. The installation will take place on the Broadway Plaza between 46th and 47th Streets.

This entry was posted on Tuesday, October 2nd, 2012 at 04:58 @249 and is filed under DailyDOOH Update. You can follow any responses to this entry through the RSS 2.0 feed. You can leave a response, or trackback from your own site.