Sharks were seen recently prowling the pool of the Beverly Hilton hotel.

Luckily, however, they were just projected images from a Christie digital projector, which used a Christie YK200 dual-arm yoke, with a Christie projector mounted on it, to move the sharks back and forth across the pool. 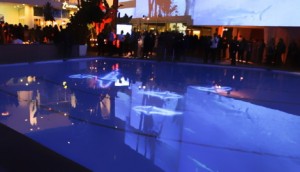 Sharks in the pool

The event was part of the recent 25th anniversary celebration of Shark Week, the popular Discovery Channel program that details the lives of one of nature’s most intriguing and feared predators. Attended by press, producers and friends of the network from around the world, the festivities took place at the Beverly Hilton hotel poolside.

Bart Kresa, principal, BARTKRESA Design, says, “In this event, in order to do this across the whole pool, we probably would have had to set up six 20K projectors. With the Christie Nitro, we can use one projector and then create an animation. When we move the animation and the projector around, it looks natural. The sharks are moving around the pool but it sort of gives the sense that the whole pool is filled with an image.” 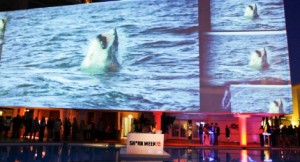 Sharks on the wall

Contributing to the success of the Shark Week display provided by Nitro Solutions was the Pandora’s Box media manager and server, which, managed the movement of the Christie YK200 yoke and the sharks’ movement throughout the pool.

“Five years ago, doing something like this was quite a bit more difficult because we had to measure and calculate everything, and everything had to be very, very precise,” says Kresa. “The cool thing about the new technology is that working with digital projectors and with digital tools, we can pre-design everything.”

This entry was posted on Thursday, October 4th, 2012 at 09:59 @457 and is filed under Scuttlebut. You can follow any responses to this entry through the RSS 2.0 feed. You can leave a response, or trackback from your own site.