World’s Largest Photo Exhibit ‘A Day in the World’

Today, the largest photography exhibition ever staged is taking place, put together by Posterscope, and involving 284 digital networks and 73 media partners transmitting the remarkable images to over 85,000 screens across all the major continents. 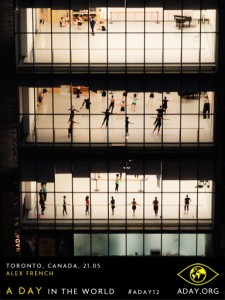 The event is phase two of a project that was started by ADay.org last May. Aday.org was initiated by the Swedish non-profit foundation Expressions of Humankind. The foundation supports scientific research and education centered around the photographic image and the written word, with the aim of inspring creative reflections on humanity by experiencing global perspectives.

In phase one, ADay.org asked people around the world to pick up their camera and photograph daily life. The response was phenomenal with over 100,000 photos from 165 countries submitted in this unique project which reflects how we lead our everyday lives in 2012. The project is supported by many of the world’s leading public figures including Archbishop Desmond Tutu, Sir Richard Branson and Jan Eliasson (Deputy Secretary General of the United Nations). 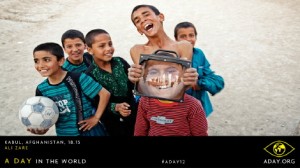 Now, in phase two, 45 of the best photographs taken are being shown around the world in the largest photography exhibition ever staged – reaching an estimated worldwide audience of 46 million over a period of 48 hours. The massive, globally synchronized and unprecedented operation kicks off on the farthest easterly screen in Sydney, Australia and travel across the world until it reaches the most westerly screen in the USA.

Digital Inventory includes the iconic ABC Screen in New York’s Times Square, the Media Wall in Liverpool – Europe’s largest commercial screen, as well as the Harmon Corner digital screen in Las Vegas – the world’s largest full motion LED screen. In all over 2,700 individual pieces of copy will be used. 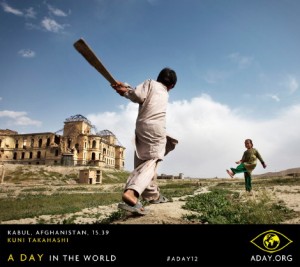 “It is fantastic to be involved in this remarkable and totally unique initiative which documents how diverse people’s lives are across the world,” says Adam Cherry, digital development director, Posterscope, one of the world’s leading out-of-home communications agencies. “The ADay exhibition itself is an amazing demonstration of the global scale that can be achieved with Digital Out-of-Home. However it would not have been possible without the collaboration from our media partners.”

Posterscope has 46 offices around the world and buys over $2.2 billion worth of OOH advertising space per year.

The pictures included here are among those being shown, but we hope to have photos of actual screens running photographs to show later today or tomorrow.

This entry was posted on Sunday, October 7th, 2012 at 11:00 @500 and is filed under DailyDOOH Update. You can follow any responses to this entry through the RSS 2.0 feed. You can leave a response, or trackback from your own site.