Consolidation Needed to Grow The Industry

Consolidation within the digital out-of-home/digital place-based media sector is generally seen as a necessity if the industry is to grow. 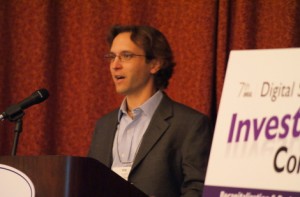 “There are too many of us!” Bill Gerba, CEO, WireSpring,Fort Lauderdale, told the audience at the Digital Signage Investor Conference in New York last week.

While that point is a given among the major industry players at least, Gerba gave a good rundown on the mergers and acquisitions that he has seen over the years that are helping consolidate the industry into a group of solid verticals, and , along the way, to get rid of a number of smaller companies that simply weren’t making money and were going nowhere in terms of growth.

There are three categories of mergers and acquisitions, Gerba said: strategic, restructuring, and asset deals. Of the strategic deals that have taken place over the past couple of years, he gave varying figures, but it seems that about 25% were vertically healthy, and about two-thirds of them were done of necessity.

“Every year, 50% of strategic deals had to be done,” Gerba said. “However, there were few recent deals on the network side, most being in the vendor or other categories.”

Five things are holding back good mergers/acquisitions, he said. These include:

“Many companies have such ‘iffy’ revenues that they can’t contribute to a public company’s top line let alone the bottom line,” he said. “Plus, most public companies want you to match your valuations to theirs.”

Of course, there are a lot of things that are beyond companies’ control when considering M/As, such as economics or an ugly transaction history.

“There’s a also future failures-in-the-making,” Gerba said. “Some companies are just not pulling their weight and will take others down with them.”

Gerba says that there are several large networks that could be currently considered in that state.

In suggesting what sellers can do, Gerba said, “For networks, if there’s cheap dollars out there, use it to build front-loaded scale. For vendors, find a growth niche where your technology plays and focus 100% on that. And for all, keep your primary business objectives front–of-mind. But don’t lose sight of what potential acquirers might be interested in.”

In looking at the immediate future, Gerba says that it’s a buyers’ market. Companies with minimal revenue won’t have trouble finding buyers – but they won’t like the price. Network owners should be aware that workflow and custom agreements will be second only to earnings to get the attention of potential buyers. For vendors, IP assets will come more into play. And he does forecast more consolidation that will probably continue to look like previous deals.

“Massive scale is one accelerator that can help with consolidation in the industry,” he said. “You have to look like a mass media.”

This entry was posted on Wednesday, October 24th, 2012 at 06:00 @292 and is filed under DailyDOOH Update. You can follow any responses to this entry through the RSS 2.0 feed. You can leave a response, or trackback from your own site.