It’s DOOH Not #DpbMedia On The European Scene 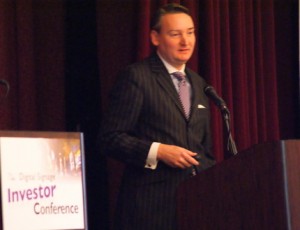 Huelsermann followed up his talk at the 2011 conference with an update during which he mentioned that the moniker Digital Place-based media means nothing in Europe.

He also stressed that the lack of one name for the DOOH sector is “still confusing the world, including agencies. Don’t mess around. Establish DOOH as a global category.”

And, showing a photo of one of the newer screen placements, he said “As for screens at urinals, brands are not interested in seeing themselves in front of the loo, despite the spatter-proof screens.”

As the audience expected to hear, the European market was hit hard by the Euro crisis. Only Germany had solid growth. The U.K. is in a deep recession. But advertising spending has been rather stable. That of Germany was up 2.7%; the U.K. 3.4%; France 0.9% – but Spain was down -12%.

“Significan mergers have given this market enormous drive,” he said. “Solid double digit growth is forecast.”

He said that there wasn’t an Olympic effect in the U.K. because of over-supply. There’s a lesson here: don’t increase prices before a major event.

“And while the big outdoor companies dominate, there are other smaller companies doing incredible stuff in their niche.”

An interesting fact, with the highly fragmented Spanish market hit by the Euro crisis, is that some Spanish companies are moving out of the home market to South America – which is also the place in students’ plans. However, Huelsermann said, clever companies are investing to be ready for better times.

He also said that, to gain momentum, innovation in terms of such things as facial recognition, open standards, etc., must be adopted more quickly in the European market.

“You people are on the cusp of something big,” Huelsermann said. “Europe is a great place. Invest now.”

This entry was posted on Tuesday, October 23rd, 2012 at 08:40 @402 and is filed under DailyDOOH Update. You can follow any responses to this entry through the RSS 2.0 feed. You can leave a response, or trackback from your own site.