DOOHgood, an all-volunteer effort to use the promotional muscle of digital signage to do good, has ramped up efforts to help victims of this week’s super-storm in the US northeast.

The organization is already making a Twitter app available at no cost to ad-based, retail and private digital signage networks, and is looking for help in developing video creative that will drive donations to the American Red Cross [1] and its Hurricane Sandy relief efforts. 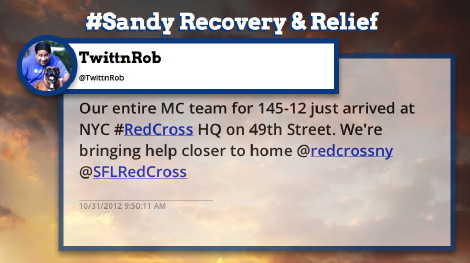 Long Beach, California-based Insteo [3], which specializes in interactive tools and content for digital signage networks, has developed and released a Twitter visualization app that networks can use to run at no cost in their schedules. The app is HTML5-based and it queries and filters keywords to maintain high quality messaging.

“What we don’t have, and need as soon as possible, is a 15-second piece of video with a basic call to action to make a text donation to the Red Cross, which will be funneled to the Sandy relief effort,” says Dave Haynes, an industry consultant and one of DOOHgood’s founders. “If we had multiple, and some in Hispanic, even better.”

Haynes says the Red Cross has B-roll video and images available for media companies, and expects developing a solid spot would only take a matter of a few hours at most.

“DOOHgood was really started in the immediate aftermath of the Japan earthquake and tsunami,” says Haynes. “We had a huge response to that, both in original creative and the numbers of networks running spots. The magnitude of this disaster is obviously not as large, but with every hour we’re seeing how parts of coastal New Jersey and New York are in a very bad way. Anything that can help drive donations is, I think, worthwhile.”

The Twitter app is ready to download off the DOOHgood site [4], and Haynes would like to hear from network operators using it, and from any creative teams willing to put together a video PSA.

This is a great initiative and hats off to Mr Haynes for all his efforts.

I don’t want to pour cold water on any of this, but its worth noting that Twitter’s guidelines recently changed to become Twitter’s POLICY which includes display requirements regarding the mandated use of Twitter branding and other aspects of reusing twitter content.

Stephen – we believe that since our content is primarily focused on digital signs, not exactly like your solution which is promoted for use anywhere (laptops, classrooms, tablets, and more) that we’re bound by these guidelines instead: