Last week, we interviewed Susan Musleh. CEO, about Touch Me Info-Pods [1], a product which we’ve seen on the web and promoted as a network of interactive guides to what’s happening in Indianapolis. 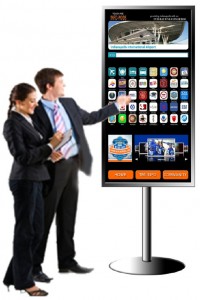 [2]However, the website is up a little early: Touch Me Info-Pods doesn’t actually exist yet, although Indianapolis is where it is being developed and where it will likely be seen first since it’s the home of Musleh and where she has been developing and personally backing the product.

Musleh, an artist, has been developing the product as a combination of directory of local places and events of interest for tourists – but it goes beyond that. At the top is space for an advertising banner. In the centre are the icons of the local places and events that, when touched, lead to the websites or information of each. And at the bottom are three separate areas marked community, social and shopping.

The community area is strictly for the icons of local businesses and will be free for them to promote themselves, leading to their business when the icons are touched.

“The idea is being very well received by the businesses and events here in Indianapolis, and we envision taking this nationally,” says Musleh.

The social sectors will have the icons for all the social media sites that one can imagine, and Musleh plans for the finished product to have two cameras: one for security purposes and the other allowing users to take pictures of themselves and post them to their social media sites with a sort of ‘Look where I am’ by tourists. 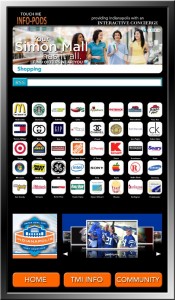 [3]And Musleh sees the shopping sector as an opportunity for global brands to promote themselves though the icons when touched. Like the top ad, she plans to use this sector to monetize the product as well.

“I’ve designed this as an artist to be pleasing to the eye, and I’ve had people like the Super Bowl management tell me they’ve like to see it available immediately,” she says. “However, I want to have the program, the software, the correct players, etc., perfected and in place.”

For that reason, too, she hasn’t yet arranged the hardware provider. She sees Touch Me Info-Pods for use both in malls and on city streets, so has to be sure that the final product will be weather and tamper-resistant.

“And once it’s up in test mode, we’ll be data mining the traffic in real time,” she says.

“As an artist, I look at technology as clay with which to build practically anything,” says Musleh. “I designed Touch Me Info-Pods as technically iconic, with touch, and as a sort of cross between the web, the smart phone, and a flip album. Building the icons was like building a gallery show. I see Touch Me Info-Pods as linking communities together.

“Touch was very important, but I can see the product eventually being able to incorporate NFC and even making it transactional.”

Musleh hopes to have a test ready for February, 2013. In the meantime, she’s open to possible partnerships. She can be reached at Susan@TouchMeINfoPods.com.