Microsoft Australia activated an Australian first in outdoor advertising this week for the launch of its blockbuster video game Halo 4 via JCDecaux. 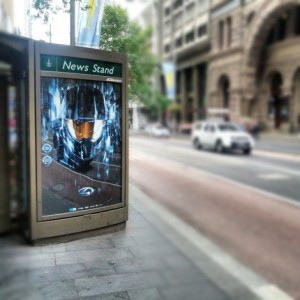 [1]The interactive campaign, Capture the Poster, encourages the Xbox online community and Halo fan base to participate in a real-world scavenger hunt to claim a rare, signed Halo 4 artwork that is used within the outdoor advertising campaign.

Kimberley Francis, interactive entertainment lead at Microsoft Australia explained “We find that there is a strong demand for people wanting to keep the outdoor posters from advertising campaigns when it relates to an iconic entertainment franchise or pop culture”.

She continued “In anticipation of the interest we expect the Halo 4 and The Master Chief advertising to receive, we found a way to reward that passion and dedication with the chance to claim the limited edition poster used in the campaign – it’s incredibly unique”.

The first person to find each poster in one of 400 outdoor JCDecaux billboard locations in Sydney and Melbourne, using Tapit [2] or by scanning the QR code claims that poster as their prize – which will be delivered to them once the campaign finishes, Ed.

Andrew Davis, co-founder and head of operations at Tapit told us “This is the first time the Tapit platform has been used to truly gamify an outdoor campaign … we’ve never before seen a campaign where the mechanic and advertising is also the prize, I would say the project is ground breaking in that respect”.