While Pattison Outdoor offers digital spectaculars, billboards and digital screens in transit, we have to applaud the company for its new green initiative, completely overhauling its lighting system infrastructure on its standard billboards. 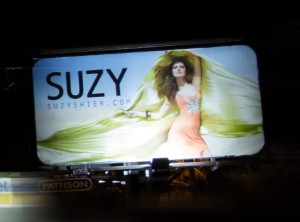 Over the past six months, a total of 7,800 outdoor billboards were converted to new energy efficient LED light fixtures. The project was designed to coincide with the shorter days of the fall and winter when boards are illuminated for longer periods of time.

“By converting the boards to LED’s, we have lowered our electrical consumption by 66%,” says Randy Otto, president, Pattison Outdoor.

Steve McGregor, vice-president operations, says, “We are constantly researching environmentally friendly alternatives and innovative technologies to minimize the impact on the environment in the neighbourhoods in which we operate.”

Of course, Pattison has 29 Digital Spectaculars across nine markets in Canada including several landmark, high traffic locations including Gardiner Expressway in Toronto; Autoroute 40 in Montréal; and King George Highway in Vancouver. Their Smart screens adjust brightness to ambient light.

And it offers 40″ screens in Toronto transit, reaching over 1,150,000 captive viewers daily.

This entry was posted on Tuesday, November 13th, 2012 at 10:00 @458 and is filed under DailyDOOH Update. You can follow any responses to this entry through the RSS 2.0 feed. You can leave a response, or trackback from your own site.