Millennial Media [1] took an in-depth look at what is happening in the retail and restaurant vertical in its November SMART Report released Tuesday. 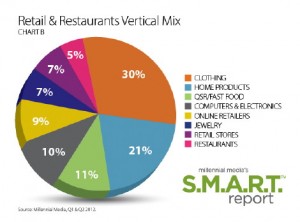 [2]The retail and restaurants vertical was the third largest on Millennial Media’s platform in the first half of 2012. During these six months, spending grew at an average of 11% per month.

Increasing foot traffic was the top individual campaign goal in the vertical, comprising 38% of all campaigns.

Further, 44% of all campaigns in the retail and restaurant verticals used a Store Locator. This was significantly higher than the platform average of 19%
. 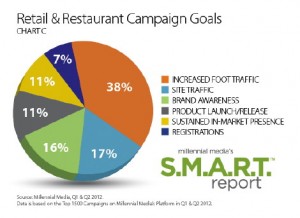 [3]Further, 36% of all campaigns in the vertical featured an mCommerce post-click action, which was 4.5 times Millennial’s platform average.

Over 60% of retail and restaurants’ advertisers used a form of location-based targeting in the first half of 2012.

Within the retail and restaurants vertical, clothing retailers accounted for 30% of all campaigns.

Home product retailers were the second largest advertisers in the vertical, followed by QSR/Fast Food restaurants.

1 Comment To "Millennial Media Looks At Retail And Restaurants"

The sad fact is restaurants and bar owners either fail miserably or wildyl succeed generating profits that can amount to millions of dollars in annual sales.

Another sad fact learned after three years of attempting to do business with bars and restaurants is to observe that their success is generally not attributable to intelligence andworking smart as the owners and operators are perhaps the dullest most ignorant and truly stupid people in small business that fail to understand how the use of connected TV and digital signage can and does in fact generate and retain more walk-in customers and steadfastly believing that nothing but old football games and CNN with no sound on their TV sets are the secret to their success.