Is That Heather Locklear?

At first glance we thought this was Heather Locklear AND then noticed it was a Virtual Mannequin. 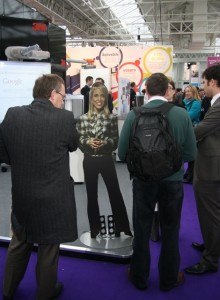 Heather (it wasn’t ‘Heather Locklear’ by the way but we will call her that for the purposes of this post) was the star of 3M’s stand at last week’s BETT show. This was the first time that a UK audience had got to see the technology.

We think that 3M can quite rightly herald this as “the next interactive technology concept for attracting attention and driving sales at the point-of-sale (PoS)”. As we have written before this is not only cool but also very eye-catching.

Lloyd Cole, European Marketing Manager, 3M’s Optical Systems division told us “Our Virtual Mannequin is an entirely new and novel medium for communicating promotions to the retail floor. It can take on any shape to reflect a human body, cartoon character and a wealth of other imaginative forms.”

In an in-store environment, for example, a video of a salesperson is recorded in the first instance and the Vikuiti Screen is laser cut to the exact shape and size of their upper body. The Screen is then placed on the shop floor on a stand or custom made static display for the lower half of the body. A rear mounted projector controls delivery of the video to the Screen and synchronises with directional speakers positioned down by the Virtual Mannequin’s feet to bring it to life. The speakers ensure there is no sound interference with the rest of the retail store.

This entry was posted on Friday, January 23rd, 2009 at 10:29 @478 and is filed under DailyDOOH Update. You can follow any responses to this entry through the RSS 2.0 feed. You can leave a response, or trackback from your own site.

One Response to “Is That Heather Locklear?”