Following the announcement of its official partnership with Movember [1] last month, media agency Carat [2] has teamed up with Cogeco Métromédia [3] for the launch of a campaign across the Montreal subway network (ie. the Métro) in favor of the cause. 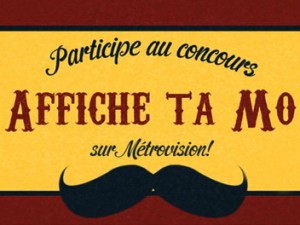 [4]For the first time in its history, Movember is establishing its presence in underground transport with the aim of multiplying conversations and awareness for prostate cancer and male mental health.

The initiative consists of a contest called “Display your Mo on Metrovision” and will run throughout November on 116 Métrovision digital screens across the entire underground transport network. Subway users are urged to support the famous fundraiser by growing charitable mustaches and sending over photos that highlight their Mo. The campaign emphasizes the key role played by the Mo Bro and Mo Sista community through the visibility and fundraising efforts they garner during the entire month.

“We are very excited about having the opportunity to initiate the conversation on male health in the subway network, a first for Movember in the world,” says Matt Matheson, communications and public relations manager for Movember Canada. “We are always on the lookout for new and creative ways of extending and engaging with the Mo Bro and Mo Sista community. The playful and participative approach adopted by our partners is in keeping with our core values and culture.”

A preliminary photo selection and a draw are being carried out every Friday throughout November. To be eligible, participants must be official Movember members. Each winner receives $100, which is directly deposited in the form of a donation on their online profile. In addition to the cash prize, the winner’s photo and name are displayed throughout the Métrovision network and on the Metrovision website [5].

Advertising agencies are also eligible to the fundraising contest and participate by submitting their best team photo taken in the bus or metro station of their liking.

“Since its creation, Movember has redefined charity and how to get people talking about the cause and we are thrilled to be able to support our partners by offering them an innovative environment to connect with the Montreal public,” says Ody Giroux, executive vice-president, Carat Montreal. “Together with Cogeco Métromédia, we hope to garner wide participation and encourage the public to adopt the mustache and share their collective experience for this vital cause.”

“The Métrovision network was developed to carry a conversation with an urban audience,” said Claude Lamoureux, Cogeco Métromédia vice-president and general manager. “We are happy to be taking part in a dialogue between the public and Movember in an entertaining and powerful manner.”

To participate, in the contest, photos must be submitted to info@metrovision.ca.

On Movember 1, guys register at Movember.com with a clean-shaven face. For the rest of the month, these selfless and generous men, known as Mo Bros, groom, trim and wax their way into the annals of fine moustachery. Supported by the women in their lives, Mo Sistas, Movember Mo Bros raise funds by seeking out sponsorship for their Mo-growing efforts. Mo Bros effectively become walking, talking billboards for the 30 days of November. Through their actions and words, they raise awareness by prompting private and public conversation around the often ignored issue of men’s health. At the end of the month, Mo Bros and Mo Sistas celebrate their gallantry and valour by either throwing their own Movember party or attending one of the infamous Gala Partés held around the world by Movember, for Movember. The funds raised in Canada support men’s health issues, specifically prostate cancer and male mental health initiatives.