We are now starting to get stand designs and product announcements in prep for #ISE2013 next January in Amsterdam. 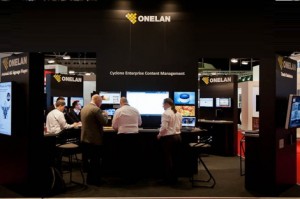 The ‘Digital Signage Zone’ was sold out a long time ago and whilst the pre-exhibit conferences look poor (well, non-existent apart from one or two) #ISE2013 will literally be a who’s who of the digital signage world – err we even heard that BroadSign have taken a small amount of exhibit space.

ONELAN tell us they will be launching Cyclone, its new Enterprise class content management solution – no doubt as it attempts to move away from its strength in the education sector.

We first met the visionary for Cyclone (see Pony Tail above, mind you he does play a ‘mean guitar’) two years back at ISE and the product, in our mind was ill thought out, over complicated (it was all in ‘broadcast’ terms) and quite simply re-inventing what dozens of other vendors already have (I distinctly remember teling them two years ago to go buy Dynamax who had / have everything that Cyclone was supposed to offer).

We quote from the press release “Cyclone provides automated campaign delivery to digital signs, LED screens, tablets, mobiles, websites and more. Managed workflow and metadata allow Cyclone to generate uniquely targeted playlists automatically, enabling Cyclone to scale from networks of tens to hundreds of thousands of players” to which we say woopidoo!

Anyway, ONELAN are in Hall 10 stand Q130 and if you want a solution for your school they are well worth going to speak with.

This entry was posted on Wednesday, November 14th, 2012 at 16:26 @726 and is filed under Scuttlebut. You can follow any responses to this entry through the RSS 2.0 feed. You can leave a response, or trackback from your own site.