United Oil is expanding its relationship with Birmingham, Michigan-based Gas Station TV, video network at the pump, installing the forecourt media program at 17 more of its locations – bringing the total number of sites outfitted with GSTV to 117 across Los Angeles and San Diego. 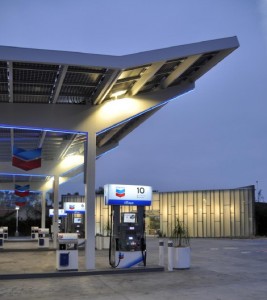 Also as part of the agreement, United Oil will convert six of its legacy sites in Los Angeles from Outcast Media’s Fuel Network to GSTV.

“GSTV has been a great partner and I look forward to expanding our relationship with them,” says Jeff Appel, vice-president and CFO, United Oil Company. “We were one of the first gas retailers to deploy GSTV back in 2007, and now I won’t open a station that isn’t equipped with the network.”

United Oil is an authorized distributor of fuels for Shell, ConocoPhillips (76) and Valero, operating retail stations throughout southern California. The company emphasizes first class retail facilities with the aim to provide customers with a pleasant buying experience and not just another visit to the gas station.

“Having a long term partner such as United Oil – who has firsthand experience with both our product and our competitor’s – continually recommit and expand our relationship, speaks volumes about the quality and relevance of GSTV,” says David Leider, CEO, GSTV. “Relationships like the one we have with United Oil don’t happen by chance. It is further testament that GSTV not only elevates the refueling experience from a mundane necessity to an informative, entertaining experience, but it also drives impact for our gas retail partners and increases customer loyalty.”

GSTV reaches more than 37 million monthly viewers at the nation’s leading gas retailers in 110+ U.S. DMAs. Through its inOvationTV partnership with Wayne, a GE Energy Business, the network is on track to increase its monthly reach to over 70 million.

Offering an industry-leading experience, GSTV engages, influences and drives consumers to action on behalf of its advertisers and gas retailers with exclusive content including news from CNN’s Headline News, entertainment headlines from Showbiz Tonight, sports from ESPN, business and personal finance reports from Bloomberg TV, and GSTV’s original social media program, ‘Your Neighborhood’, in addition to local weather updates from AccuWeather.

(Leider, by the way, will be DailyDOOH’s next CEO Spotlight feature. – Ed)

This entry was posted on Tuesday, November 20th, 2012 at 10:00 @458 and is filed under DailyDOOH Update. You can follow any responses to this entry through the RSS 2.0 feed. You can leave a response, or trackback from your own site.