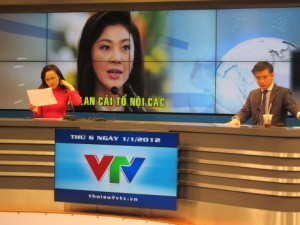 [4]Established in 1970, VTV has gone through the tumultuous Vietnam war years with its broadcasting function delivered intermittently from a mountainous region.

After reunification in 1975, the national network was available to the entire country. VTV took its official name of Vietnam Television in 1987 and subsequently has offered two national TV channels for the people since 1990.

Today, VTV is a household name in Vietnam, attracting more than 70 million viewers daily. The VTV news studio in Hanoi is currently used for Thoi Su 1900 (or 1900 News in English), the main daily news and one of VTV’s prominent programs which airs at 7pm. The news is broadcast across all the free-to-air channels available in Vietnam. This is a time when most of the Vietnamese families sit around the dinner table to catch up on the news happenings of the day. Other, smaller news segments on economics, sports and weather also broadcast from the studio.

Being the national TV station, VTV took the lead in breaking away from the norm of a monotonous backdrop to set up a more dynamic studio setting. Vietnam has regional TV stations, but most of these TV stations use a blue screen or a simple LCD monitor as the backdrop for their news studios. VTV’s mission was to propel itself forward so as to be on par with other international studios. Therefore, the management of VTV drew their inspiration from international news studios such as CNN (Cable News Network) and FOX News. 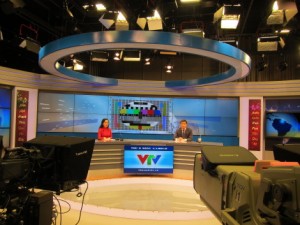 [5]In the process of rejuvenating its news studio, the management of VTV recognized the importance of visual display technology in uplifting its image. Most of the international news studios that they referenced were installations commissioned using Christie products.

The management team was impressed with the brightness, clarity and color of the content delivered onto the video wall in these news studios. Therefore, Christie became their ultimate choice.

“Besides having an illustrious track record in news studio installation, Christie was chosen (by VTV) for the three-year warranty which is a very attractive feature in its product offerings,” says Yian Kian Lee, regional manager, Vistron Vietnam [6]. “What tops up the offering is the local support from our office in Vietnam. As a reliable partner of Christie products, we’re always there for our customers. We’re a useful resource they can count on.”

Making Christie their choice was an easy decision to make but selecting the right combination of Christie products to make the VTV news studio backdrop dynamic was the tough one. After accessing and matching their needs with Christie’s products, VTV went with Christie FHD551-X flat panel for its minimal seams, full HD resolution and a highly energy-efficient LED backlight. Christie MicroTile was also chosen for its DLP technology and maximum image quality in demanding indoor, high ambient light environments. Another Christie product on VTV’s choice list was the Christie Spyder X20 that unifies the content across all the displays with 20 megapixel video processing, matrix switching and integrated source monitoring. 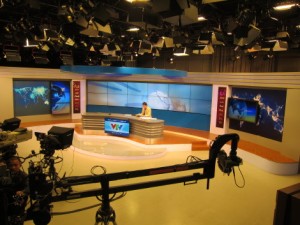 [7]The main video wall of the VTV news studio is flanked by 12 Christie FHD551-X flat panels set in an array of two units by six units.

Another single Christie FHD551-X flat panel also takes on a prominent position on the newscaster’s desk as a support display unit to show the logo, date and program title.

Both sides of the video wall are lined with two sets of Christie MicroTiles set in a column array of one unit by six units.

“The flat panels and MicroTiles form the hardware for the news studio. What connects all the different display units is the magic of Christie Spyder X20 video processor,” says Lee. “The Christie Spyder enables a single operator to coordinate the content for all of these different technologies as if it were one very high resolution, interactive display.

“From the point of signing the contract with our partner to commissioning the project, the installation was completed in a record time of three weeks. This happened during the peak holiday season towards the end of 2011. To be exact, it started one week before Christmas and VTV was hoping to complete the installation three days before TET, the Lunar New Year.”

To make things work well, assistance was sought from Christie’s headquarters to speed up the delivery process. As the local systems integration partner has no prior experience with such installation, Vistron’s technical team from Singapore and representatives from Christie’s technical support office from Singapore were flown in for the set-up, supervision, programming and training.

The result: Satisfaction with an attractive, eye-grabbing set.