After a development and trial period of four-and-a-half years, City 24/7’s Smart Screens are finally up and running in New York City. 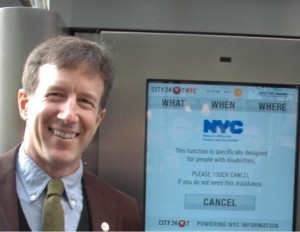 When we talked last Friday, Tom Touchet, CEO, told us that 10 screens were now set up in Union Square and that more are going up daily across the city with an initial target of 250.

Union Square is of course one of the most vibrant, active neighborhoods in the city with countless dining, shopping, entertainment, cultural and nightlife options.

It took much longer than expected to bring together all the pieces, but we are told that it will not stop there now that the technology has been perfected and the company is already eyeing 19 cities in the U.S., Canada, Europe and Asia where it plans to take its Smart Screens next.

Partly that’s due to the help of Cisco’s Global Public Sector, one of numerous companies of all descriptions who have partnered to help City 24/7 put together its interactive screens geared for pedestrians and advertisers, mainly hyper-local i.e small business advertisers.

Not that national advertisers will be turned away! Already on the 32” portrait format screens is LG Electronics, one of City 24/7’s main partners who has also supplied the screens. The ruggedized outdoor high-definition LED touch-screen monitors were designed to be intuitive and user-friendly. 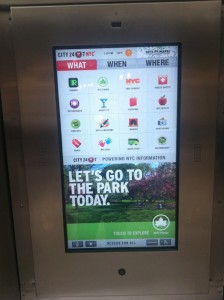 “The screens try to give people everything they would need as they walk through New York City,” says Touchet. “They are located wherever payphone locales are, and the sites are wireless. Retailers can offer coupons, use QR codes, and do promotions with pedestrians using their smart phones. Everything is geared with mobile.

“The icons on the screen lead to a myriad of information: transit, health, schools, community gardens and much more. If there are special events such as Christmas markets, there are ways to find these. And the screens have back-up batteries in case of power failure.”

The screens are, to date, multilingual in terms of English, French, Russian and Mandarin, with languages to be expanded – Surprisingly, Spanish, the second language in the U.S., hasn’t yet been added, Ed.

Also to come in the next few months is a portal allowing local advertisers to design and add their own ads using templates with a variety of type, ability to add artwork and logos, and more.

Information and ads run on a four-minute loop, divided into three dayparts. 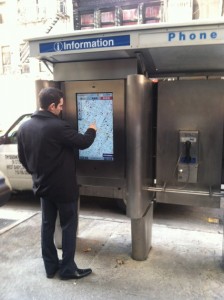 “All our partners have been great, but I have to give special mention to Livewire Digital and its president David McCracken,” says Touchet. “He has been incredibly helpful.”

McCracken says that both Livewire Digital and City 24/7 share a common vision of empowering people to connect with information they want and need, wherever they are, and whenever they want it.

“We’ve seen a natural progression over the past few years in user engagement activity, beginning first with single points of information via kiosks in stores and hotels and then migrating to larger deployments of interactive digital signs in venues such as resorts and malls,” says McCracken. “This marks the turning point to linking people, government offices, and private services together across entire cities such as New York City, by integrating kiosk, digital signage, and mobile technologies.

“While New York City offers a perfect setting for the initial deployment due to its pedestrian lifestyle, this Smart City concept is applicable to cities and towns of all sizes. The beauty of the City24x7 Smart Screen offering is that it can easily scale to accommodate all communities, thanks to Livewire’s eConcierge product.”

Screens are becoming more interactive and Touchet says that eventually all signs will be digital. And while City 24/7 is using the 32” screens for the pay phone locations, already in the works are 65” screens for bus shelters and even larger ones for news kiosks and for transit platforms.

The launch partners all show enthusiasm.

“We are delighted to partner with City24/7 to provide information and tickets to Broadway, Off Broadway and beyond,” says Gretchen Shugart, CEO, TheatrerMania. “City24/7’s kiosks may be the beginning of a magical New York theater experience.”

This entry was posted on Monday, November 26th, 2012 at 00:10 @048 and is filed under DailyDOOH Update. You can follow any responses to this entry through the RSS 2.0 feed. You can leave a response, or trackback from your own site.