With the high footfall of Oxford Street, London it is fast becoming both a test bed AND a centre of innovation for retail digital signage – not signage in stores necessarily BUT signage in the windows facing out onto the street definitely! At first it was the likes of MediaZest with mobile phone network retailers falling over themselves to put big touchscreen interactive displays in their shop windows and now it seems that trend is trickling down to other types of retail. 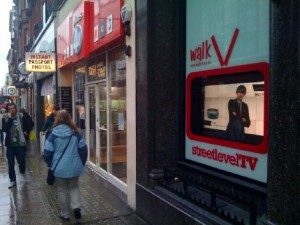 The installs are a collaboration between Motomedia, one of our HOT picks in 2008 and ArcstreamAV using ITrans screens (from Cambridge firm Screen Technology Ltd.) wrapped in a vinylwrap surround to draw attention to the display.

The campaign running at the moment is for hair care manufacturer TIGI.

Streetleveltv of course is based on the foundation that Motomedia has built with its innovative ‘streetlevelbillboard‘ offering. 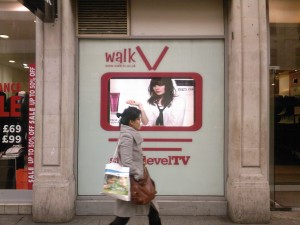 It looks to us like this is the fixed network offering that we have thought Motomedia should have been offering sometime ago. The first retail partner appears to be a chain of shoe shops called WALK and we believe that there are a number of other landlords coming on stream shortly.

The signage solution is a product called aisense from a Barcelona startup (I dare not write the word ‘Spanish’ here) called Artificial Intelligence Technologies, S.L. – known also as AITECH.

We understand that a further 30 locations will be deployed in three stages by November 2009.

If you want to take a look for yourself, here are the details: –

This entry was posted on Thursday, January 22nd, 2009 at 19:16 @845 and is filed under DailyDOOH Update. You can follow any responses to this entry through the RSS 2.0 feed. You can leave a response, or trackback from your own site.

One Response to “Window Innovation Continues In Oxford Street”