’I am proud to say that it was a banner year for the Digital Signage Federation [1] and our industry as a whole,” Alan Brawn, principal of Brawn Consulting [2] of Vista, California, and DSF chairman who moves to the role of past-chairman when the not-for-profit trade organization puts its new executive board in place early in the new year. 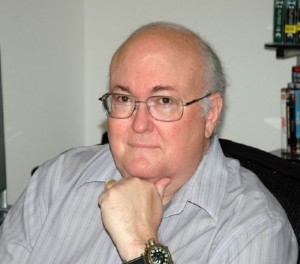 [3]“During my tenure as DSF Board chairman, our accomplishments were truly team efforts by our board members, committee chair people, and staff,” says Brawn.“

The organization has between 350 and 400 individual members and 235 member companies. Brawn is the third chairman since the organization was founded in Feb/10.

He was immediately preceded by Bob Stowe, director, marketing services for Wendy’s International [4], who has been past chairman over the past year, and by initial chairman Rich Cooley, CEO and founder of Visser Digital Media.

“We are proud to have initiated a number of programs and services that serve the greater good,” says Brawn. “And there were no egos showing. It’s been a case of what’s good for the industry as a whole.

“Our members represent a wide group of constituencies, We expanded our educational offerings with multiple webinars each month by noted experts in the various fields of digital signage. We reached out to many constituencies including the manufacturers and distributors who provide products to us as well as the content creation and advertising communities but most importantly we reached out to network operators and end users to better serve their needs.”

Brawn says that Cooley’s year was spent in getting the DSF really up and running, making more contacts and developing committees and subcomittees and ‘worker bees.’ Stowe added industry credibility and pioneered the DSF official seal. Brown’s focus was on education and Phil Cohen, president and CEO, CARE Media Holdings Corp. [5] and incoming chairman (currently vice-chairman) is expected make his mark in the areas of research and analytics that the industry can count on and also membership development so that even more members will have a path to contribute, ie. advocacy and outreach.

“Every chairman has a mission and, hopefully, a legacy,” says Brawn. ”I took the organization to the next level to provide infrastructure for those to come.

“The consistent theme for the DSF is education and service in an impartial, agnostic, and vendor neutral manner. We published the educational standards for the industry to add structure to all the information out there and help people focus on the key elements, and provide a consistent flow of good people who know what the business is all about. Our advocacy and outreach committee has grown exponentially with numerous sub committees under that ‘umbrella’.

“The major way that the education was expanded was through a series of frequent webinars headed by top-line experts in their fields. Depending on the topics, they drew between 75-to-80 to 250-to-300.”

Coming up in 2013 will be an event that will help educate members of the International Sign Association [6] about the offerings available in digital signage and to make contacts both ways between ISA and DSF members which could result in new business opportunities. This Dynamic Digital Signage Day [7] will be held on April 3 prior to the three day trade show April 4-6.

“This is a great opportunity,” says Brawn. “The ISA has about 22,000 attendants compared to the DSE’s 5,000-to-6,000. The static sign industry is developing an interest and this could result in new partnerships and new markets.

“Next year, I expect we’ll see more of our own agnostic research, too,” says Brawn.

We asked Brawn his thoughts on the current efforts and rulings that seem intent on banning digital billboards in Los Angeles [8].

“It would be a blow,” says Brawn. “It’s the tip of the iceberg. It wil be at the forefront of some people’s minds. If they are banned, you’ll probably see more indoor digital signage. But politicians and municipalities love money, so …!

As Cohen moves up, Brawn tells us that Kim Sarrubi, president of Saddle Ranch Productions [9], is expected to take on the DSF’s vice-chairman position, and that Ken Goldberg, CEO of Real Digital Media [10], is expected to be secretary-treasurer.