Displair To Demo Screens Made Out Of Air At #CES

One company debuting at #CES which is well worth a booth visit is Displair, who will be showcasing their interactive multi-touch screens made out of air… 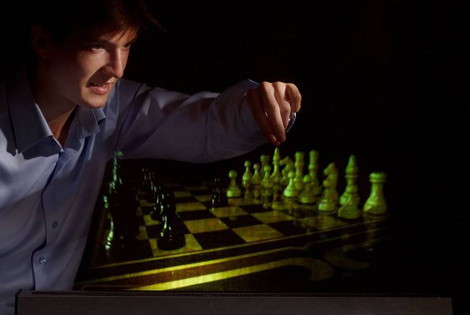 Displair connects directly to your computer (and in future years, game systems) to create an interactive, multi-touch screen made out of air. An image is created in the air using ultra-fine, clean water drops that create a curtain of air that leave your fingers dry when you touch it. Sensors inside the device combine with highly tuned software to track your hand and fingers precisely and instantly.

It’s actually projection onto an air/water droplets screen, with a motion sensor providing the interactivity. Inevitably, there are mentions of a certain movie beginning with M (which is 10 years old now) in the PR, and in most press coverage to date, but this comes nearer to that dream than a lot of technology that’s referenced it prevoiusly.

The motion sensing is capable of detecting much smaller movements compared to Microsoft’s Kinect, so it should be capable of touch screen like sensitivity, rather than just broader gestures.

Displair technology was created in Russia, will roll out in North American later in 2013 and will be on display at the CES Eureka Park TechZone on Level 3 at the Venetian, in booth #74410.

This entry was posted on Thursday, December 20th, 2012 at 13:02 @584 and is filed under DailyDOOH Update. You can follow any responses to this entry through the RSS 2.0 feed. You can leave a response, or trackback from your own site.