Live coverage of the 18th Republic of Korea presidential election on Seoul Broadcasting System (SBS is a private South Korean television and radio network) started at 3:00 p.m. that day and ended at 12:30 a.m. the next morning and used a nice 140 Christie MicroTiles set in an array seven units tall by 20 units wide. 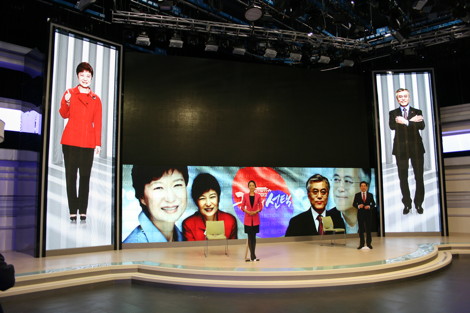 Note, it’s only MicroTiles in the centre, Ed.

In Tae Kim, president, System Ray, a Christie partner who worked on the project told us “In the by-election held in April 2011, SBS used MicroTiles for the broadcasting of election results. They were rather satisfied with the flexibility of the MicroTiles to stack up to form different shapes as well as the image quality”.

We are told that the MicroTiles had significantly differentiated SBS’s appeal to the viewers against other broadcasting stations to achieve a viewer rating of 13 percent in the April 2011 election.

This entry was posted on Friday, December 21st, 2012 at 02:51 @161 and is filed under Scuttlebut. You can follow any responses to this entry through the RSS 2.0 feed. You can leave a response, or trackback from your own site.