One of the perils of being public. We noticed this Form 8-K for BROADCAST INTERNATIONAL INC [1] where they have had to state that back on December 7, 2012, they were informed by their largest customer [2], that its contract to provide digital signage services that had previously been extended to February 1, 2013, would be extended through April 30, 2013 and would then terminate. 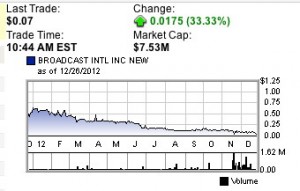 [1]Their largest customer is of course the Bank of America that is currently going through a tortuous RFP process for digital signage provision.

The Form 8-K does mention that Broadcast International will continue to provide managed media services to the Bank of America for a three year period but it’s our understanding that ‘managed media services’ is broadcast TV and audio into the branches and is simply a resale of DirecTV.

The Form 8-K also makes mention that, we quote “a substantial portion of the Company’s revenues from the customer are for the digital signage service” – if it’s as much as 90% of their revenue, as we estimate, it can surely only mean that Broadcast International will soon be toast.