John Brownlee over on Cult of Mac posted, a couple of days ago, this picture “taken by Instagram user and MTV Geek contributor Alexander Zalben” in a post ‘Times Square Billboard Crashes To Desktop… On A Mac‘ (6:42 am PDT, 26th Dec 2012)… 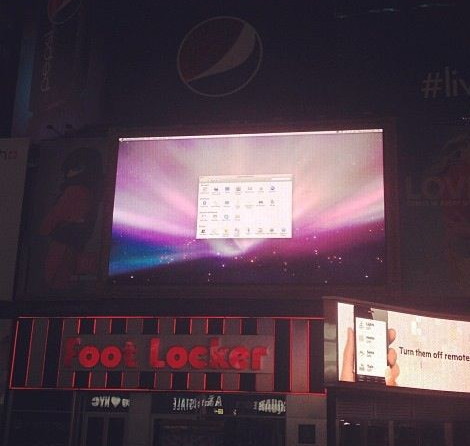 It shows the Mac OSX desktop (we assume) that should be running the digital signage software. It’s not, we are told, software from  ~sedna GmbH so we wonder what it might be.

This entry was posted on Friday, December 28th, 2012 at 19:13 @842 and is filed under Scuttlebut. You can follow any responses to this entry through the RSS 2.0 feed. You can leave a response, or trackback from your own site.