Just prior to Christmas, we had a long chat with Chris Wiegand, CEO and co-founder, with Adam Artman, CIO, of Toronto-based Jibestream [1]; 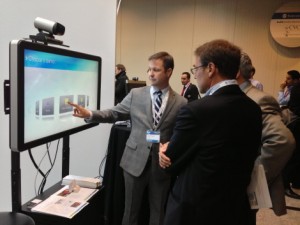 When we talked, Wiegand was basking in the glow of Jibestream having been selected Canada’s Most Innovative Company in Information and Communication Technology by the Canadian Innovation Exchange [3].

Although Jibestream’s clients include global media companies, government agencies, tourism venues, hospitals, office towers, and large format retailers, the company has kept a low profile since its founding in 2009. But we expect to see more of the company now.

The award was a quite a coup for Wiegand, who has been an entrepreneur since age 10 when he ran a roadside vegetable stand. He later ran a boating company before getting into the technology world dealing with the web, digital marketing portals and data-driven messages.

On the other hand, Artman, Wiegand’s partner, has been in creative design and technology all his life with various advertising agencies, prior to co-founding Jibestream.

“We tended to stay off the radar while building the company,” says Wiegand. “But this year, we are tracking a 500% growth in revenue over last year.” 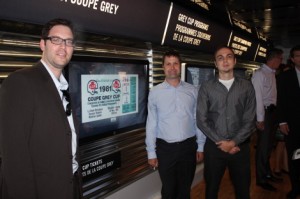 Jibestream’s ‘NovoMap’ is a digital interactive wayfinding platform that is deployed in large buildings and public spaces through information stations/kiosks and mobile devices. With its platform, visitors are able to quickly and efficiently access the information they are looking for while receiving relevant information based on real-time data.

The system has features and functions that allow venue owners to optimize cost-savings and create workflow efficiencies. In the appropriate settings, NovoMap can also generate new revenue streams such as targeting advertising messages to users who interact with the platform.

A primary benefit to NovoMap is the user interface. It offers a clean and modern design which is engaging for all people regardless of their technological/ technical know-how. In collaboration with designers and system programmers, Jibestream creates maps that take into account human behaviours that are unique to each different venue.

A significant differentiator of this system is the ability to integrate with third-party data and technologies combined with business rules to deliver a relevant message. For example, NovoMap has telepresence integrations that enable people to have a face-to-face video call directly from the user interface. That ability to connect with an operator/virtual expert allows quick and easy access to live support for users while venue owners enjoy significant cost savings opportunities. Other examples of integration include emergency messaging systems, third-party digital signage platforms, Electronic Health Records, Active Directory, and accessibility hardware, among many others.

“We focused from the beginning on interactive wayfinding,” says Wiegand. “We started with shopping malls, then moved into health care, corporate, government and the rest. About 25% of our installations carry advertising that strategically support the messenger platform.”

Jibestream works closely with Elo Touch Solutions [5], implementing NovoMap solution on Elo Touch screens and kiosks. Elo develops, manufactures and markets a complete line of touch products that simplify the interface between people and computers in public-access and employee-activated applications. 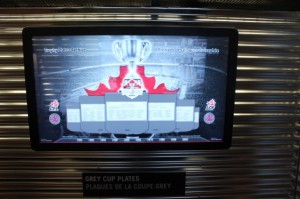 Screen on the CFL Train

“We offer a turnkey solution, and are sold through resellers,” says Wiegand. “We also partner with Cisco Systems Inc. [7] for video conferencing, remote expert and more. And everything we do is mobile compatible.”

The company has major clients including the Pentagon for wayfinding and NATO headquarters in Belgium where it deals with directory integration. in Belgium. Among its many other clients are: Merrill Lynch. Standard Life, RBC, RSGC, U.S. Department of Defence, Canadian Tire, several universities and many more.

“Everything we do requires different skill sets, and we develop our own software,” says Wiegand. “And we focus on accessibility, which is important for the elderly and people with disabilities.”

Not everything Jibestream does is on a kiosk. It built a donor wall at Northern College, for example. And it equipped the CFL train with interactive screens. This Grey Cup 100 Train Tour presented by RONA visited all eight Canadian Football League cities – Vancouver, Calgary, Edmonton, Regina, Winnipeg, Hamilton, Toronto and Montreal – as well as Ottawa, Quebec City, Moncton and Halifax. Jibestream and Cisco worked together to create an interactive digital experience in the Grey Cup Car, showcasing the rich history of the game through touch-screen Cisco monitors and an interactive digital signage mosaic which uploaded fan photos in real-time to the display. Fans were able to use the touch-screens to swipe through CFL archives, seeing Grey Cup Champion Photos, Grey Cup Tickets, Grey Cup Programs, Schedules and Grey Cup Trophy Plates.

Jibestream isn’t a big company. However, its staff of 15 have multicultural backgrounds.

“We draw people from around the world who have strong skills,” says Wiegand. “We don’t do offshore development. I foresee exponential growth for us, and for the industry at large. There’s been a huge jump in scalability. And we know that there are a lot of first year pilots out there that will be rolled out this year.

“As for Jibestream, our core value is our efficiency and simplification of complex data. As to the future, we want to be a leader. The award has brought us new opportunities in terms of new leads from resellers, greater recognition, and it has validated our strategy.”