Expect to see a number of announcements at #ISE2013 from digital signage software vendors supporting the ‘Samsung Smart Signage Platform‘. 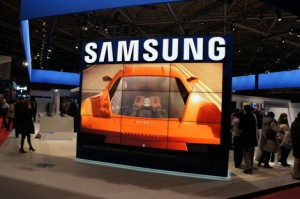 As we’ve often said, no glass manufacturer has really got software right so it will be interesting to see how Samsung’s efforts in this space will be any different from previous bungled attempts.

Whilst Signagelive have been teasing like mad (assuming that ‘SmartLFD – SmartTV technology for the commercial world‘ is related to this announcement) it has been Scala who got in first with a semi-official notice.

Scala’s latest press release stated, we quote “From a software stand point, the brand new integration between the Scala Enterprise software and the new Samsung Smart Signage Platform will be launched”.

The Samsung Smart Signage Platform is “on board (of) the high industry grade displays of Samsung” and is obviously pitched at a plug and play solution for digital signage users. Samsung is also this year’s main screen sponsor for the Scala stand, providing more than 20 displays ranging from 32 inch to 40, 46 and 55 inch in size.

As is the case with all announcements, the real news is all of the digital signage software vendors who declined to be part of the ‘Samsung Smart Signage Platform‘ rather than those who have actually come on board.

Samsung can be found in Hall 1 on Stand F18.

This entry was posted on Monday, January 14th, 2013 at 09:50 @451 and is filed under DailyDOOH Update. You can follow any responses to this entry through the RSS 2.0 feed. You can leave a response, or trackback from your own site.