Pattison Onestop today has launched Art in Transit, a new curated arts programme on the Pattison Onestop Digital Mall Network, which will screen every five minutes in 42 shopping centres across Canada. 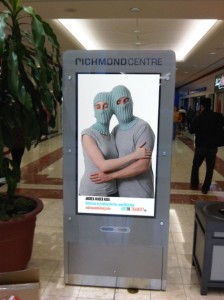 It will be followed by Daily Random Word Doodles, twitter-inspired illustrations by Australia’s Charles Santoso (Chao) Feb. 1 – March 1. This will also be seen on the Toronto subway screen network March 2 – March 31.

Art in Transit, is part of Pattison Onestop’s year-long arts and culture program, presenting thought-provoking projects that enhance our shared environment and transport city-dwellers, if only momentarily, out of their daily routines.

This entry was posted on Tuesday, January 15th, 2013 at 10:00 @458 and is filed under DailyDOOH Update. You can follow any responses to this entry through the RSS 2.0 feed. You can leave a response, or trackback from your own site.