We’ve been following Los Angeles and the various laws and potential laws regarding billboards in that market for a couple of years, with our last article in Dec./12 noting that the 2nd District Court of Appeal ruling the permits for 100 digital billboards put up in Los Angeles are invalid. 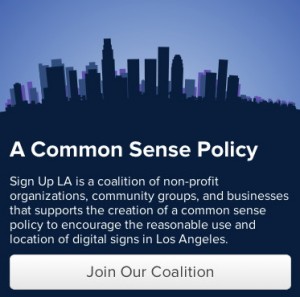 So it was with interest that we’ve learned that various business groups, non-profit organizations and community groups have joined with outdoor sign companies to announce the launch of Sign Up L.A., a coalition to support the development of policies designed to encourage the use and location of digital billboards in L.A.. The coalition wants to bring community benefits to the city, such as enhanced public safety initiatives and increased economic development, and it’s supporting policies similar to those used in 43 states and over 450 cities, towns and districts across the country, including the California cities of Sacramento and Oakland.

The coalition’s mission is to advocate for public policies in support of digital sign usage that will maximize the public benefits of signs, generate the economic benefits to businesses and the local economy (including good-paying jobs, wages, benefits, taxes and fees), and produce new revenues and jobs in the city of Los Angeles during a time of fiscal constraints. The coalition also supports policies that allow the city to modernize its outdoor advertising landscape, including improving signs by employing sustainable, modern digital technology, ensuring that these signs are located in appropriate non-residential areas, and reducing the number of existing static signs.

Sign Up L.A. plans to release a series of white papers looking at the ‘Digital Gap’ that will impact the city of Los Angeles should progress not be made in implementing digital signage public policy, with the first focusing on public safety. Additional studies to be released focus on revenues, impact on the economy, and impact on business and non-profits.

The coalition says that outdoor advertising industry is a critical partner to the community of Los Angeles and, without digital signs, public safety messages, like Amber Alerts and emergency situation warnings are lost, and the many non-profits that rely on billboards to communicate their causes will be left without donated advertising space.

Further, outdoor advertising represents a critical part of the marketing mix for both small and large businesses, creating opportunities that allow these businesses to effectively reach both L.A. residents and tourists, and encourage local consumerism. This will help grow local businesses as well as job creation.

Digital billboards allow the changing of messages in real-time, making it possible for advertisers, law enforcement and other public safety agencies to rapidly reach large audiences quickly and efficiently with important, even life-saving messages.

The coalition plans to use the positive examples of digital billboards in other cities to bolster their arguments.

This entry was posted on Wednesday, January 23rd, 2013 at 10:00 @458 and is filed under DailyDOOH Update. You can follow any responses to this entry through the RSS 2.0 feed. You can leave a response, or trackback from your own site.